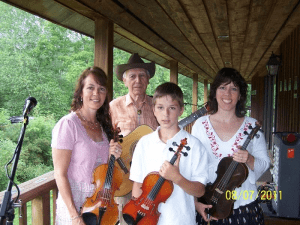 The Kurpil Family Fiddlers will perform at the Time and the Valleys Museum on St. Rt. 55 in Grahamsville, Sullivan County, on Sunday, April 30 at 2 pm.

They will perform fiddle music while intermingling local fiddle music history, song history and the origins of fiddling.

The Kurpil Family are native Sullivan County residents. John Kurpil came to America with his fiddle and he taught his children to play. His sons Sam and Peter Kurpil of Liberty started their own band in the 1950’s called the Kurpil Ranch Boys. Along with their brother-in- law Joe, they played and sang current music of the day accompanying themselves on guitars and fiddle. Sam went on to teach his children and grandchildren the same old time fiddle music and in 1997 he created a band by the name The Kurpil Family Fiddlers. The band consists of Sam on guitar and his daughters Cindy Gieger and Christina Jones doing fiddle and vocals. On occasion they are joined by grandson Rudy Gieger and granddaughter Kathleen Burns.

The Kurpil Family Fiddlers are dedicating his program to the memory of Ray Muthig, a longtime family friend, loyal fan of their old time music and staunch supporter of the Time in the Valleys Museum.

The program is free for members, and $3 for non-members. This program also includes an exhibit of fiddle photos and memorabilia and light refreshments. For further information on the programs or exhibit call (845) 985-7700, email info@timeandthevalleysmuseum.org or click here.

The Time and the Valleys Museum is a living and interactive resource that preserves the past, educates the present and ensures the uniqueness of the Rondout and Neversink watersheds for all generations.