Lord Edward Stanley,  who would later become the 14th Earl of Derby and  Great Britain’s Prime Minister during the reign of Queen Victoria, was a member of the party. As they crossed the Hudson River at Glens Falls on the return trip to Saratoga, Stanley noted in his journal, “Cooper… was much struck with the scenery which he had not before seen; and exclaimed, ‘I must place one of my old Indians here.”

Cooper, Stanley and the others then climbed down to the rocks to get a closer view of the cave where the novelist would, in fact, set one of the most famous incidents  in  his ‘Last of the Mohicans.’

According to James A. Holden, New York State’s official historian  in the early 1900s, “(Stanley) family legend has it  that the future Lord Derby told Cooper ‘here was the very scene for a romance,’ and the author promised his friend that a book should be written in which these caves would play an important part.”

Holden added that Cooper “affixed to the cave an undying fame, so that for nearly a century it has been a visiting place for European and American travelers. for scientist and layman, for geologist and artist, for seekers after the unusual…”

In fact, the cave could be said to be America’s first roadside attraction.

According to historian Russell Bellico, a set of wooden stairs enabled 19th century visitors to explore the cave.

A concerete spiral stairway was constructed in 1915 and remained in place until 1962.

Until recently, no formal or official access to the cave was allowed. A viewing platform, however, has been constructed by the Village of South Glens Falls and the City of Glens Falls which at least allows visitors  to see the falls and a portion of the cave.

Given the prominence of Cooper’s novel and the popularity of the 1992 film version that starred Daniel Day-Lewis, it’s perhaps surprising that more hasn’t been done to take advantage of the landmark.

Someone who has is Patty Bethel, who grew up near the cave in South Glens Falls.

In 1995, she, her husband Ed and their son Adrian opened Cooper’s Cave Ale Company, a micro-brewery that has grown to include a pub, an ice cream stand and much-in-demand craft soft drinks. 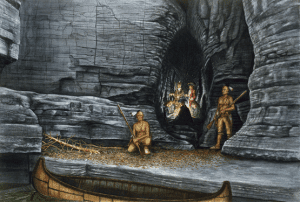 Even its brews’ names are inspired by French and Indian War lore; they include a Pathfinder Porter, a Sagamore Stout, a Radeau Red, Garrison Ale and a Tavern Ale.

“Ed and I had been 18th century re-enactors since the 1970s, and our idea was to educate people about the fact that our local history is a very big deal,” said Patty Bethel.
She added, “I grew up in a family where we had to make do with what we had. Here, we’re surrounded by history. So we’ve utilized that.”

The Bethels secured an industrial building on the edge of Glens Falls that just happens to be on the Old Military Trail, which, in Cooper’s novel, would have been the route taken by Munro’s daughters – Cora and Alice – from Fort Edward to Lake George.

It’s also not far from the site of the historical event that inspired the novel – the massacre of  British and American by France’s Native American allies.

Once a railroad bed, the trail is now more or less coextensive with the Warren County Bike Path, which reached the Bethels’ building in 2000.

With an entirely new customer-base passing their building every day, the Bethels saw an opportunity to create a new revenue-stream; thus the ice cream stand was born. The ice cream stand, in turn, gave rise to a brisk business making and selling ice cream cakes.

The pub opened in 2007 when an adjacent building became available.

“We’re not here to save the universe, just this corner if it,” quips Bethel.

“We work hard,” she acknowledges. “If anyone gets anywhere, it’s because of hard work.”

Cooper’s Cave Ale Company beer, soda and ice cream products are available at its retail store at 2 Sagamore Street. The pub is open for lunch and dinner daily, with the exception of holidays (Super Bowl Sunday included.) For more information, call 792-0007.

A version of this story first appeared on the Lake George Mirror Magazine.