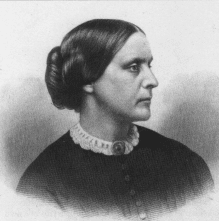 One hundred years ago, New York State women won the right to vote, three years before the federal amendment. To celebrate that milestone, many local organizations have lined up to host presentations by Susan B. Anthony expert Jeanne Gehret. The 11 talks, which cover two distinct topics, will present Anthony family members in Rochester who were at the center of universal suffrage — for both women and African-Americans — for sixty years.

Penfield Public Library will host Jeanne Gehret, who will give a presentation “All for Suffrage: Susan B. Anthony’s Kin” on April 27, 2017. Her other presentation, titled “Failure is Impossible,” features a costumed presentation of Miss Anthony “in person” and will be featured twice at Votetilla, the upstate celebration of New York State Woman Suffrage to be held this July. A current list of Gehret’s talks is available here.

“All for Suffrage: Susan B. Anthony’s Kin,” is based on the research that underpins Gehret’s 2017 historical novel The Truth About Daniel. Gehret also wrote Susan B. Anthony And Justice for All (1994), a children’s biography that was used in Rochester city schools for more than a decade.

The Truth About Daniel, first in the Dauntless Series, focuses on one of the most surprising branches of the Anthony family tree. After taking part in the Underground Railroad movement in Rochester, Daniel Read Anthony migrated to Kansas to fight the bloody border war with Missouri. A man who was both loved and hated, he was physically assaulted at least nine times. One time he would have died had not Susan and others sat for twelve weeks holding a finger on his neck wound to keep him from bleeding out. The novel is rich in scenes and references to Rochester.

Since 2014, the author has shared her historical research online. A native of Kansas City, Gehret moved to the Rochester area in 1955. She volunteered as a docent in the 1990s at the Susan B. Anthony House and has recently been featured on Fox News and in 55+ Magazine.

To schedule interviews, book readings, and signings, contact her at (585) 746-7239 or Jeanne@Verbalimagespress.com.

Verbal Images Press is an independent publisher in Fairport, NY. The Truth About Daniel is available online at Amazon.