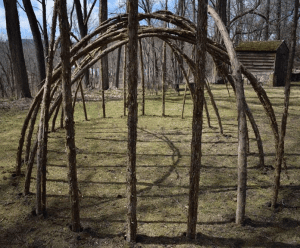 Historic Huguenot Street has announced that it is constructing a replica Munsee Native American wigwam to celebrate the 340th anniversary of the signing of the 1677 land agreement between the Munsee Esopus sachems and the Huguenot Refugees.

The land agreement provided for the 12 Huguenot founders to “purchase” nearly 40,000 acres of land in the lower Wallkill Valley. The village that developed within the borders of this land is now known as New Paltz.

Today, Munsee people continue to thrive as several federally-recognized Indian Nations in Oklahoma, Wisconsin, and Canada. The wigwam will serve as an ongoing testament to the Munsee Esopus people who first populated this land.

Native American crafts expert and museum consultant Barry Keegan has begun authentically constructing the replica wigwam on the DuBois Fort lawn and using locally sourced materials. Keegan is the former Supervisor of Native American Programs at the New York State Historical Association and Farmer’s Museum in Cooperstown. He has constructed over 70 wigwams and longhouses for museums, nature centers, and educational institutions, and regularly demonstrates early technologies for these organizations, as well as others such as the History Channel.

The wigwam will be under construction through the spring. In early April, New Paltz school children, college students, and members of the community helped build the wigwam.

Historic Huguenot Street will incorporate the wigwam into its regularly scheduled tours, set to begin May 6, although those who attend the Museum’s Spring Celebration on April 29 will have an exclusive opportunity to tour the wigwam, hear Keegan discuss his process and the daily life of the Munsee, as well as meet Bonney Hartley, Tribal Historic Preservation Officer for the Stockbridge-Munsee Mohican Nation. Over the course of the season, Keegan will additionally create arrows, axes, buckskin, fire-making tools and pottery, recreating the daily life of the Munsee people.

For a preview and tour of Historic Huguenot Street’s replica historic home, the wigwam, or to purchase tickets to the Museum’s Spring Celebration, click here.

Funding for the wigwam, and its related educational programming, was generously provided by Elwyn V. and Elsie H. Harp Family Foundation Fund of the Hartford Foundation for Public Giving, and by the Hudson River Valley National Heritage Area.