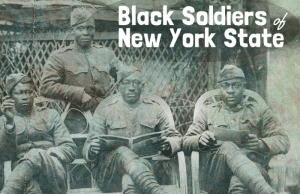 African Americans have a long, and often overlooked record of serving in NYS armed forces. Join the Schenectady County Historical Society on Saturday, April 1 at 2 pm, as author Anthony Gero explores the contributions of New York’s African Americans prior to the military’s integration.

African American solders – in spite of many obstacles – served courageously and valiantly, winning many commendations and earning the respect of friend and foe alike. This talk is presented as part of the “Together Until the End: Schenectady in the First World War” series.

A retired high school teacher in Auburn, New York, Anthony F. Gero teaches history at Cayuga Community College, State University of New York, and is a Fellow of the Company of Military Historians. He has written numerous articles on military history and is the coauthor (with Roger Sturcke) of New York State National Guard.

Admission is $5 for non-members, free for SCHS members. More information is available on the Schenectady County Historical Society’s website.