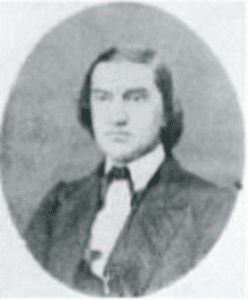 The Schenectady County Historical Society will host a talk and book signing by local historian Neil Yetwin on February 11, 2017 at the Mabee Farm Historic Site.

Neil will be signing and selling copies of his book To My Son…: The Life and War Remembrances of Captain Mordecai Myers, 13th United States Infantry, 1812-1815.

Reverend Horace G. Day (1819-1904) was known as “Schenectady’s Abolitionist Preacher.” Born in Hudson, to Horace and Millicent Day, Horace Jr. would attend Hudson’s Baptist Sunday School and would eventually teach and become a superintendent of the school. He moved to Schenectady on January 1, 1847 and roomed with future President Chester A. Arthur on Franklin Street and would preach at Schenectady’s First Baptist Church.

On Thursday 29, 1855, Day was invited to give a Thanksgiving sermon at the First Dutch Church where he praised abolitionists and condemned slave traders as evil “traffickers in human flesh.” This sermon caused quite a commotion and the press engaged in a ten week debate as to whether it was appropriate that Day used the pulpit to discuss slavery. He would go on to become an extremely popular minister in Schenectady. He died on October 3, 1904 and was buried at Parkview Cemetery.

Neil Yetwin taught history, English and psychology for 35 years, 32 of those at Schenectady (formerly Linton) High School before retiring in June of 2014. He has published nearly 100 articles in a variety of journals and newspapers, including Yankee Magazine, the History Book Club Review, the Albany Times Union, the Schenectady Gazette, the Schenectady County Historical Society Newsletter, The Thoreau Society Newsletter and The Papers of the Ralph Waldo Emerson Society, and has lectured extensively about local history at public schools, colleges, libraries, historical societies, places of worship and veterans organizations throughout New York’s Capital District and beyond.

Admission is $5 for non-members and free for SCHS members.  For more information contact SCHS Librarian Mike Maloney at librarian@schenectadyhistorical.org or (518) 374-0263 ext. 3.