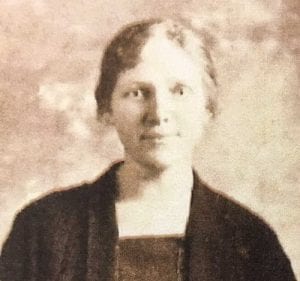 What’s most important of course, is that she did in fact make a name for herself in the art world. From the time she was very young, Phoebe gravitated towards artwork created by cutting out paper shapes, which were then displayed over an offsetting background. For instance, a cutout from black paper was presented over a background of white paper. The method was known generally as silhouette.

As Phoebe Warren in 1915, she became very popular in the Jefferson County area as a special guest at social events. Folks marveled at her ability to create accurate silhouettes right before their eyes. As noted in the Jefferson County Journal, “With only a pair of shears and a piece of paper, she cuts a picture of any person in perhaps two minutes, and it is such a good reproduction of the person that it will be recognized at once.”

During her second marriage, the Hazlewoods lived about ten miles west of Watertown near the shore of Lake Ontario, just a few miles south of Sackets Harbor. Their home, near Bedford Creek and Campbell Point, was widely known as Bedford Gardens. Phoebe was talented at many artistic pursuits—clay modeling, sculpture, sketching, and particularly painting on glass—but her prodigious skills in creating wonderful cutouts led to a pair of nicknames: the Silhouette Lady, and more elegantly, the Silhouette Lady of Bedford Gardens.

At the time, silhouette art was enjoying a resurgence in the United States, largely because of the work of Beatrix Sherman, whose clients included President Woodrow Wilson, Henry Ford, Thomas Edison, and a host of other public figures, both national and international. Sherman’s fame repopularized the art form, which traditionally had its ups and downs. But it was always a passion for Phoebe, who during the next decade continued hosting exhibitions and demonstrations, always to popular acclaim. Using scissors, sheep shears, or even razor blades, she could create a silhouette within minutes, with subjects ranging from personal and animal profiles to cowboy, ocean, and farm scenes.

In late 1925, Phoebe was “discovered” when her work received praise from art critics in Chicago and New York — no small accomplishment for someone using a process considered fringe among more popular and time-tested mediums. In Chicago, her “delicate, subtle treatment of silhouettes” was cited, and in New York City, exhibitions of her work led to similar reactions. She spoke and “performed” at important gatherings, including the May 1926 annual meeting of the Northern New York Federation of Women’s Clubs, a three-day event held at Ogdensburg. 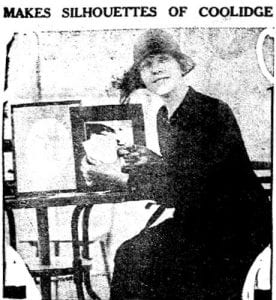 By mid-year, three of the nation’s top art critics had called Phoebe one of America’s leading artists. The high praise led to her official big break in July, when it was announced that President Calvin Coolidge, then residing at the “summer White House” in the Adirondacks — White Pine Camp on Osgood Pond in Paul Smiths, New York — would be sitting for the North Country’s most famous artist.

Her sudden elevation in stature found Phoebe on a list of morning presidential appointments that included the former US ambassador to Italy, the president of the New York Central railroad, and Edsel Ford. Despite the importance of those official visitors, it was Hazlewood whose audience with the president was extended, courtesy of Coolidge’s own request. He was so pleased with her first silhouette of his face that he asked her to remain and do a full-body image of him standing by the fireplace. She obliged, and while creating her magic, Phoebe answered many of the president’s questions about her life and work, which he complimented.

The headlines that followed across the country solidified her standing in the nation’s art scene. Back in her hometown, newspapers proudly emphasized that the famous artist working with the president was originally a North Dakota girl.

After profiling Coolidge, she was prevailed upon to exhibit and demonstrate silhouetting at the State Fair in Syracuse, where Phoebe sat among sketches, paintings, and sculptures created by New York’s finest artisans. Onlookers watched in amazement as she quickly cut away at black sheets of paper and added a white background to reveal marvelous renditions of animals, faces, action scenes, or full-body outlines.

Over the next several years, she was in frequent demand for appearances and interviews. Articles featuring her work appeared in publications like The Farmer’s Wife, Up-Stater, and the magazine section of the Syracuse Herald. While creating new artwork and making many public appearances, Phoebe landed a second celebrity client in October 1928 when aviation legend and hero Amelia Earhart posed for her in Utica, at the Utica Hotel. 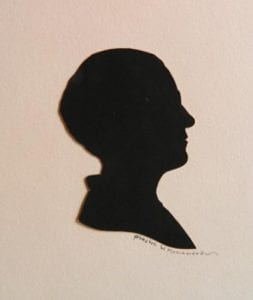 After exhibitions at Syracuse in the Grand Central Gallery, and in the nation’s capital at the Corcoran Gallery of Art — one of the most prestigious institutions of its kind in the nation — Phoebe made a special appearance in Washington. The following day, The Sunday Star, a city newspaper, proclaimed, “Silhouette Lady” Charms Congressional Club, and described her in action: “She picked up a pair of ordinary sheep shears and cut a beautiful horse in full run…. Mrs. Hazlewood said she had cut pictures since she was two years old—that it was a passion with her, a means of expression. She exhibited an intricate picture showing several figures dancing, as her reaction to a musical number that appealed to her. The most intense interest centered on the artist as she posed Mrs. Dale, president of the Congressional Club, and proceeded swiftly and skillfully to cut her profile…. The likeness was excellent and was enthusiastically received.”

In the early 1930s, Phoebe and Lewis Hazlewood moved to Florida, where he lived as a retiree and she worked as a silhouette artist. He passed away in 1937, and in 1945, at the age of 62, she married Henry Morse, 74. In 1946, to much fanfare, Phoebe opened an art gallery in Key West, providing an outlet for locals to exhibit their creations and for her to demonstrate and sell her own work, including silhouettes and paintings on glass. She also continued giving demonstrations at social events and club gatherings.

Henry passed away in late 1950, and Phoebe died in 1954. A book of poetry published in Key West in 1960 featured a half dozen of her silhouettes. A few samples of her work can be seen online here and here—barely a trace, if you will, of her outstanding career as a silhouette artist.