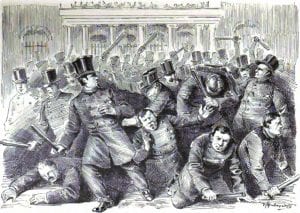 Unlike most of riots reviewed in this ongoing series, which pitted civilians against civilians and interventions by police or militia forces to restore order, a June 16, 1857 riot was a battle between the forces of the recently dissolved New York Municipal Police and the newly formed Metropolitan Police.

In reality it was really a political conflict run amuck that began when the then upstate dominated New York State Legislature – alleging massive corruption – moved to take tighter control over the operations of of the city of New York’s government.  Among several related bills that were passed during the spring of 1857, the most egregious to New York Mayor Fernando Wood was the one that eliminated the New York Municipal Police and created a the Metropolitan Police in their place.

While he fought the new law in court and in the press, Mayor Wood refused to disband the Municipals and turn over their property to the Metropolitans.  Public meetings were organized, and the Municipals put the question to a vote: 15 police captains and 800 patrolmen under Police Superintendent George Washington Matsell chose to support the Mayor.

A smaller number, among them Captain George W. Walling, joined the Metropolitans and attempted to arrest the Mayor. Walling was removed from City Hall by the Municipals, but returned with some 50 Metropolitan Police, night sticks in hand. About 300 Municipals met them and 52 policemen were injured, one crippled for life. The National Guard supported the Metropolitan Police Board and surrounded City Hall.  The Mayor was arrested but soon released after posting a small bail.

On July 2nd a final Court of Appeals ruling supported the Legislature and Mayor Wood had no choice but to disband the Municipals. Many of the remaining Municipals were accepted into the ranks of the Metropolitans.

Illustration: Fighting at City Hall between Municipal and Metropolitan police officers during the Police Riot of 1857 from “Recollections of a New York Chief of Police” (1887) by George W. Walling.