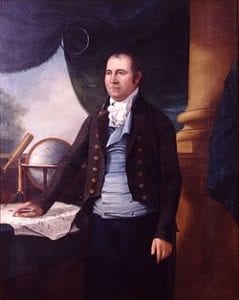 Tjerck Claeszen DeWitt, the son of Nicholas DeWitt, immigrated to New Amsterdam (New York City) from Grootholt in Zunterlant in 1656.

Grootholt means Great Wood and Zunterland was probably located on the southern border of East Friesland, a German territory on the North Sea only ten miles from the most northerly province of the Netherlands.

By 1657, Tjerck DeWitt married Barber (Barbara) Andrieszen (also Andriessen) in the New Amsterdam Dutch Church and moved to Beverwyck (Albany). While in Beverwyck, he purchased a house and his name is shown in Book of Deeds Number 2, Page 263 Albany County Clerk’s Office. At this time Albany contained 342 houses and about 1,000 residents, about 600 of whom were members of the Dutch Church.

In 1661, about the time Arent Van Curler was departing Rensselaerwyck to start a new community at Schenectady, Tjerck moved his family to Wiltwyck (Kingston). In 1662, he owned Lot 28 of the New Lots being developed.

The year 1663 saw a disagreement with the Esopus Indians escalate into the Esopus Indian Wars. For several months the greatly outnumbered settlers lived in constant fear of an Indian attack. When the attack finally came on June 7, 1663, Tjerck’s eldest daughter Taatje was captured and carried off by the Indians. Taatje was later either rescued or ransomed back from the Indians.

Tjerck DeWitt seems to have prospered even after British Colonel Richard Nicholls arrived in 1664 and claimed all of New Netherland for the British. In 1669, British Governor Francis Lovelace granted Tjerck permission to build a house and barns with outbuildings on lands previously granted to Tjerck by British Colonel Richard Nicholls. In 1672, Governor Lovelace deeded a parcel of land with a house, lot, orchard and calves’ pasture in Esopus to Tjerck, and British Governor Andros deeded him 50 more acres of woodland west of Esopus in 1677. In 1679, Tjerck was one of the signers of the Nicoll’s Treaty with the Esopus Indians. In 1689, Tjerck was serving as one of the magistrates of Ulster County, appointed by British officials.

DeWitt was a graduate of Queens College who enlisted with the upstate Colonial troops early in the Revolutionary War. He was stationed with General Philip Schuyler after Schuyler’s troops withdrew from Ticonderoga and prepared to make a stand at Saratoga. From Saratoga he penned the following letter-poem to his friend John Bogart in Albany:

Burgoyne from the North
Sir Harry Clinton from the South
St. Leger at Fort Schuyler (Fort Stanwix) to the Westward

And Baum at Bennington to the Eastward

But Mark the changing face of affairs
St. Leger rais’d the Seige
Baum was defeated.
Burgoine was taken
And Sir Harry retreated …

I wish, my friend, you had been at Saratoga when they surrendered. The most glorious, grandest sight America ever beheld …

In July of 1777 General George Washington dispatched the following request to the Congress in Philadelphia: “A good geographer to survey the roads and take sketches of the country where the Army is to act would be extremely useful … .” Washington went on to recommend Robert Erskine a Scottish emigrant and proprietor of Ringwald Iron Works in Passaic County, New Jersey to be the first U.S. Army surveyor.

Erskine began by conducting surveys for the construction of fortifications at West Point as well as Forts Montgomery and Constitution, all in the Hudson Valley. Each of these fortifications was constructed to try to prevent the British from advancing up the Hudson.

In the spring of 1778 Simeon DeWitt was appointed one of about half a dozen assistant geographers under Erskine. With the help of his assistants forwarding data to him from various battle areas, Erskine began turning out the first accurate maps of many of these areas. On October 2, 1780, Robert Erskine died of a severe cold that he had contracted in September.  Simeon DeWitt fashioned a gilt plate for Erskine’s coffin declaring “Geographer and Surveyor General to the Army of the United States of America.”

Following Erskine’s death Washington received many recommendations from his associates promoting one person or another to replace Erskine. When General Anthony Wayne recommended John W. Watkins, Washington replied: “I think it but a piece of candor to declare that I think myself obliged in justice to Mr. DeWitt, who has been long and constantly in the office, [and of whose abilities I have] heard [Mr. Erskine speak in very high terms] to recommend him to the vacancy occasioned by Mr. Erskine’s death.” Simeon DeWitt was appointed the second Surveyor General of the United States.

On August 29, 1781, Washington issued a momentous order to DeWitt:

Immediately upon receipt of this you will begin to survey the road (if it has not been done already) to Princeton, thence (through Maiden Head) to Trenton, thence to Philadelphia, thence to the head of Elk through Darby, Chester, Wilmington Christiana Bridge.

At the head of Elk you will receive further orders. I need not observe to you the necessity of noting towns, villages and remarkable Houses and places but I must desire that you will give me the rough traces of your Surveys as you proceed on as I have reasons for desiring to know this as soon as possible.

Washington was instructing DeWitt to map Washington’s advance on Yorktown. The colonial siege at Yorktown would be a major American victory.

Following Yorktown, Washington instructed DeWitt to prepare maps from Williamsburg through King William, Bolling Green and back through Maryland.

As the war came toward an end, DeWitt requested authorization from Washington to prepare a complete map of “The State of War in America.” Although Washington strongly approved such an undertaking, Congress was not ready to fund such a project.

On May 13, 1784, DeWitt resigned his position as Geographer of the United States to accept the position of Surveyor General of New York State, a position he would hold for over 50 years. He moved to Albany. 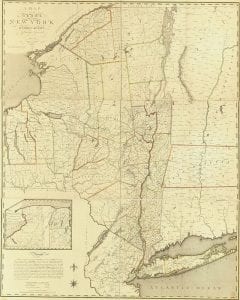 During his term as Surveyor General of New York, DeWitt mapped or re-mapped almost all of New York State. Established, older cities and towns were re-mapped to include more recent development, naming of un-named streets, and layout of areas for new development. Much of New York State, however, had never been mapped including most of Central New York.

During the Revolutionary War, Congress had authorized the award of 100 acres to each volunteer who enlisted and served until discharged. New York State added 500 acres to the 100 already authorized by Congress. Neither Congress nor New York State had much money but they had a lot of land. The award of this much land would also encourage settlement and development of the vast open spaces.

A Military Tract of about 1.8 million acres was designated in Central New York to meet this commitment. The land extended from Lake Ontario south to the southern end of Seneca Lake and from the east line of Onondaga County (Syracuse) to Seneca Lake. It took DeWitt until 1790 to issue the first sheets of his State Map of New York but in it he divided this huge Military Tract into 28 townships each containing 100 lots of 600 acres each.

He gave each of the townships an early Greek or Roman name. Thus they were named: Aurelius, Brutus, Camillus, Cato, Cicero, Cincinnatus, Dryden, Fabius, Galen, Hannibal, Hector, Homer, Junius, Locke, Lysander, Manlius, Marcellus, Milton, Ovid, Pompey, Romulus, Scipio, Sempronius, Solon, Stirling, Tully, Ulysses and Virgil. Many of these names are still the names of related cities, villages and towns in Central New York today. Other Roman – Greek names for municipalities in this area probably also came from DeWitt such as the City of Rome, Ithaca and the town of Greece.

The counties were primarily named for the Iroquois Indian Tribes as Onondaga, Cayuga, and Seneca were created along with Cortland.

In 1790 the names of eligible soldiers were put into a box and a drawing was held to assign the plots. The Balloting Book and Other Documents Relating to Military Bounty Lands, In the State of New York was published in Albany and printed by Packard and Van Benthuysen in 1825. 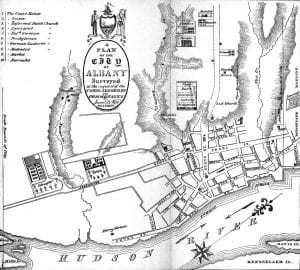 In 1794, after he had finished the Military Tract map, DeWitt undertook a new survey of the city of Albany. He realized that many new streets had not been officially named and he also laid out new streets and building lots for development. As was his custom in naming the Greek – Roman towns in Central New York, he adopted a theme in naming Albany’s Streets.

In 1795, Simeon DeWitt named the little settlement at the head of Cayuga Lake “Ithaca” after the hometown of ancient Greece’s hero Ulysses. He was so taken with the area that he and his family members started purchasing large tracts of land. For the next ten years Ithaca was a remote community but roads were being constructed.

In 1810, DeWitt wrote from Albany that he was contemplating Ithaca as his future and permanent residence. By May 9, he was in Ithaca and reported that the place had grown substantially. He counted 38 dwelling places, a three-story hotel, a schoolhouse, stores and shops for carpenters, cabinet-makers, blacksmiths and tanners as well as shoemakers, tailors, two lawyers and a doctor.

DeWitt died in 1834, having served as New York’s Surveyor General for over 50 years. DeWitt was originally buried in Ithaca but in 1844 he was moved to a vault in the Old Middle Dutch Church in Albany. In the 1890s he was moved to Albany Rural Cemetery. He is buried in Lot 30, Section 56.