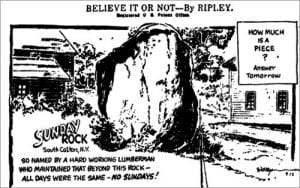 In January 1936, Dr. Charles Leete, a chief proponent of local history and a strong voice for protecting South Colton’s Sunday Rock from destruction, died. It was more than appropriate that he had been deeply involved in preserving the rock. Leete’s ancestors built much of the machinery used in area sawmills that processed the timber provided by the lumberjacks who were famously linked to Sunday Rock’s legend.

As famous as the big rock was regionally, it attained immortality of a sort in 1941 when Robert Ripley included it in his world-famous newspaper feature, “Ripley’s Believe It or Not!” A drawing of the landmark was accompanied by a full paragraph relating the legend of Sunday Rock.

In 1945, the rock’s story underwent a revival in local media with the death of Joseph Grew, the man who successfully moved the giant boulder out of harm’s way in 1925, assuring its preservation. It was noted that besides Grew, many others, including Dr. Leete, Michael Barnett, Bertrand Snell, the Sisson family, Frederick Swan, and the Watertown Times assisted in saving the rock from destruction.

From that time forward, the renowned boulder surfaced periodically in local media. In 1949, when the new Colton-Pierrepont Central School was built, several items, including a history of Sunday Rock, were preserved in a copper box placed inside the cornerstone.

In 1962, the Courier and Freeman newspaper in Potsdam began carrying Colton resident Evelyn Riehl’s new column on local news. The title: “Sunday Rock, North and South.” Her debut piece included a reference to the legend, and closed with, “This is as good a time as any to make it perfectly clear that there IS civilization and lots of it, both North AND South of Sunday Rock.” 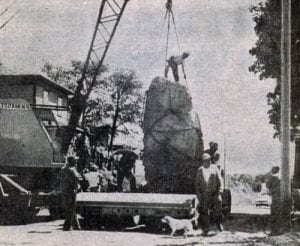 In 1965, a plan for modernization of Route 56 revived the issue that had first surfaced in 1925: Sunday Rock was once again in the way of progress. And once again, a plan was made for its preservation, complete with a new park on the opposite side of the road, where it would be showcased as part of local history. A crane was enlisted for the heavy task of relocating the rock, which was completed on June 25.

The Courier and Freeman compared the two moves that were made forty years apart:

Then: Joe Grew of Potsdam, with teams of horses, a windlass, and jack screws, laboriously moved the rock, inch by inch, a distance of about eight feet to the side of the new concrete road, taking more than a month to do the job.

Today: Cal Sherman’s 40-ton Link-Belt Crane operator, Alan Chast of Sanfordville, picked up that 35-ton weight, which had been carefully prepared by the rest of the crew as if it were a marshmallow, and placed it on a low-boy trailer. With only a short stop for lunch, the crews moved it to its new position, about 100 feet away, in a matter of about three hours.

The rock’s story has been covered occasionally over the years, including in 1968 by the New York Times. In 1998, new signage was added to the small park, using the Times’ story of the rock’s history.

In 1992, the Colton Historical Society sponsored a musical entitled Sunday Rock, which was performed at Colton-Pierrepont Central School. Cast members numbering 26 hailed from as far away as Norfolk and Ogdensburg, and were guided by area college folks with theater experience. The show, a great success, was written by Evelyn Riehl.

A 20th-anniversary revival of the production took place in 2012, backed by the same entities and the Grasse River Players. Riehl’s son, Bill, was the musical director.

The play’s revival followed a landmark couple of years for South Colton’s famous boulder. In 2010, Sunday Rock was added to the Traditional Arts of Upstate New York (TAUNY) Register of Very Special Places (RVSP), New York State’s Register of Historic Sites, and the National Registry of Landmarks. In fall 2011, a new sign in the park was unveiled, bearing the following inscription:

An Adirondack Landmark and Legend

This glacial boulder, twice preserved by local citizens, marks the gateway to the “Great South Woods.” In the frontier days it was said there was no law or no Sunday beyond this point. May all who pass this way continue to enjoy the beauty of the mountains.

Placed on the State and National Registers of Historic Places – 2010 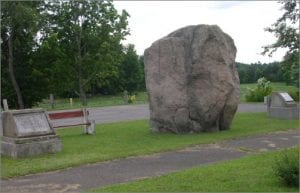 The work of many folks towards preserving the monument’s history in modern times and gaining state and national recognition was spearheaded by Sally Swift Thomas, who lived nearby the rock. For years, she and husband Bill cared for the park. Bill died in 2007; Sally passed away in 2014.

The legacy of all those fine people who worked to maintain local historical tradition lives on today as Sunday Rock. It has grown to represent the freedom and wonder fostered long ago by leaving civilization behind to enter the Adirondack paradise. What a wonderful concept.