The Community Center has been operating at 208 W. 13th Street since 1983. The entire building is intended to be a safe and welcoming place “where everyone is celebrated for who they are.” Today, the Center is an effervescent hub, and sponsors a broad-range of activities and programs for the lesbian, gay and transgender community, including health and wellness, arts and entertainment, and counseling.

The Board of the Community Center first conceived the idea of a combined gallery and archive in 1989, and has been amassing and cataloguing a host of material since that time. Chief Archivist Rich Wandel hesitates to estimate the number of photographs, letters, magazines, videos of newscasts and interviews, posters and other memorabilia housed in more than 2,000 storage boxes. The materials themselves are mostly organized as separate collections, which are listed on their website.

The Archive includes ephemera from as far back as the 1920s, but the bulk of the materials represent more recent decades, beginning with the 1969 Stonewall riot, when the gay and lesbian population of New York rebelled violently after a police raid on a popular gathering place. The exuberance and activism of the 1970s is memorialized in a host of photographs, video and radio interviews, press clippings and periodicals.

The human toll of the AIDs epidemic in the 1980s is captured in a compilation of intimate correspondence and diaries. The struggles of individual victims – as well as their partners, friends and families – to cope with a horrifying disease (at first dimly understood and nearly always fatal), against a backdrop of prejudice and denial, are vividly relived in the archival materials.

Other documentation records the new activism that unfolded in reaction to institutional indifference, which tragically delayed the development and availability of life-saving treatments. 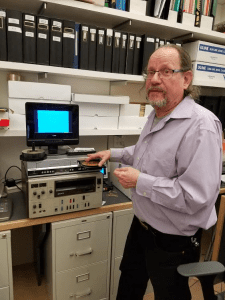 Rich Wandel and the other volunteers (and, sometimes, interns studying archival management) work out of a tidy, well-organized space, which is shared with a lending library of LGBT-related works. The floor-to-ceiling walls of books and neatly-stacked archival boxes create the overall effect of a cultural and intellectual oasis, in which any thoughtful person should feel right at home. (Most of the archives are, necessarily, stored offsite in a safe, temperature controlled location.)

The corridor leading to the Archive Center is a rotating exhibit gallery, currently featuring Jackie Curtis (1947-1985), a multi-talented, gender-bending member of Andy Warhol’s circle, who inspired Lou Reed’s classic song “Walk on the Wild Side.”

Wandel was an activist and photographer during the tumultuous 1970s, and had served as President of New York’s Gay Activist Alliance, but had no formal training as an archivist when he accepted the task of creating the LGBT Archive. After taking on the voluntary project, he completed an M.A. in Archive Management, which also led to a full-time job as Associate Archivist of the New York Philharmonic.

Rich is quick to point out that the Archive is a community facility, which strives to be readily accessible to the public, and serves a broad range of users, including professional scholars; curators, artists and photographers; college and even high school students working on papers; as well as the curious and inquisitive.

When asked how he went about accumulating what is now an enormous trove of irreplaceable historical information, he downplays the heroic effort: “I am not sure, sometimes, it seems like I just turned around one day and it was all there.” But of course Rich and the LGBT Center had a broad support network forged in the post- Stonewall era. Indeed, the ‘community archive’ description also denotes the way donated artifacts accumulated.

Today the movement remains controversial, and its history is still unfolding, but there is increasing worldwide acceptance of lesbian, gay and transgender equality as fundamental human rights, on a par with other civil rights and equality movements. This level of awareness seemed unthinkable a mere 50 years ago. Accordingly, these archives document a profound change and are of unique, long-term historical importance. They are certain to be valued by future generations.

Looking ahead, Wandel’s principal concern is to find funding for a full-time professional archivist, so the collection can survive once he steps back from his current role.

The Archive may be accessed by appointment, Tuesday through Thursday, afternoons and evenings. To donate materials or make an appointment, email archive@gaycenter.org.