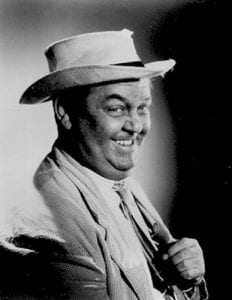 For millions of people, holidays are all about going home, returning to one’s roots of family and friends. That concept was epitomized by a North Country man who attained great fame in Hollywood, but to his great credit never forgot the home folks — and to their credit, the home folks never forgot him. Whenever he returned to the North Country, or old friends visited him in California, there was always an exchange of love, admiration, and deep appreciation.

He was born in northern Michigan in 1916 as Harold John Smith, about as anonymous a name as one can imagine, and likely one that stirs no sense of recognition. But if Otis Campbell were mentioned, many would instantly recall Mayberry’s affable town drunk from The Andy Griffith Show.

By coincidence, Harold John Smith is the given name of another star from the early days of television — Jay Silverheels, an Ontario native who played Tonto in The Lone Ranger series. But the Smith we’re interested in here was known widely as Hal, who became one of the most famous Massena residents in the town’s history. He arrived in St. Lawrence County in a roundabout way, in part because of family ties that ran deep in the Adirondacks and North Country.

His father, Jay, born in Michigan, was a millwright who maintained and repaired equipment at a variety of locations. In his early 20s, he found work in the northern Adirondacks at St. Regis Falls, where he met and became enamored with Emma Ploof of Dickinson Center (modern-day home of Joyce Mitchell, an infamous key player in the 2015 escape from Clinton Prison). Smith moved to Coinjock, North Carolina, near the Atlantic coast, but returned to upstate New York in December of that year and married Emma. They lived in Coinjock for more than two years, visiting family in the Adirondacks at least once annually before returning to the region in 1906, when Jay was hired by A. Augustus Low as superintendent of his mill at Horseshoe, southwest of Tupper Lake. He was also employed at Long Lake West (now Sabattis), located four miles farther southwest.

A devastating fire in 1908 destroyed Long Lake West, including the cattle and property of Jay Smith. Shortly after, the family returned to live in the southern United States. There daughters Kathleen (1912) and Bernadeen (1914) were born. From locations in Virginia and North Carolina, the Smiths moved to northern Michigan, where sons Harold (1916) and Glenford (1918) were born before the family returned once again to the South. In 1923 in Wilmington, North Carolina, just before he turned seven, Hal made his first show-business appearance when he and younger brother Glen played the imps that emerged from Pandora’s Box.

During all the moving from state to state, the Smiths made at least one trip home per year to St. Regis Falls and nearby villages to visit with friends and family. In 1926, they moved back north to Dickinson Center, where they lived on the 200-acre family farm, which was then operated by Emma’s brother, Arthur Ploof. The following year, Jay found work about 20 miles northwest, at Alcoa Aluminum in Massena, where the Smiths settled into a home at 12 Brighton Street and became part of the community. The children — Kathleen (15), Bernadeen (13), Hal (11), and Glen (9) — were enrolled in the Massena school system, where they would, in time, join in many activities that played a part in Hal’s future. 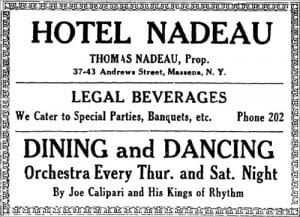 Jay was known among his coworkers as very funny, entertaining, and a great story teller, traits that he may well have passed on to his children, who seemed to love an audience. The girls, older than their brothers, took part in school plays, and by 1929, all four Smith children were playing roles in school presentations and in shows hosted by local organizations like the Maccabees, the PTA, and different churches. In an interview decades later, Hal recalled that the four siblings appeared in the amateur shows at Cohen’s Theater, earning five dollars a week.

In 1931, Kathleen and Bernadeen danced and presented vaudeville acts as the Smith Sisters, while Hal and Glen sang with friends Robert Houmiel and Earl Dutton as a quartet, the Cement Mixers. The boys made a number of appearances and often sang between acts of stage plays. Each of the Smith children performed one or more roles in most of the local stage productions. On one very busy night, Hal sang with the chorus, joined a friend in a duet, and did a solo as well.

When he was still just 14, he got his first big break, courtesy of the Kings of Rhythm, a local band led by Joe Calipari, who remained Hal’s friend for life. In the Massena Observer in 1964, reporter Leonard Prince related the story of Smith’s first big night out. As Hal told it, he arrived home at 11 p.m. after the gig, and his dad read him the riot act. “What kind of outlaw are you going to turn out to be?” he said, and when Hal said he had played with the band, his father replied, “Don’t let it happen again.”

Prince also wrote, “Smith recalled how Calipari and his band would play at the old Hilltop Pavilion just out of Norwood. People would come and stand outside to hear the music; they wouldn’t come in and pay the price. Sometimes, a musician got a quarter.” The story recalls a similar story from my own past. When a local hotspot, The Pavilion (near Rouses Point on the shores of Lake Champlain) was filled to capacity, we stood outside among the cars and listened to the music. 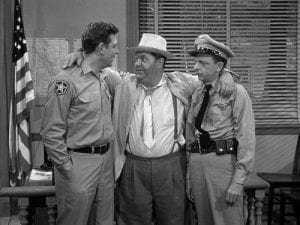 During their high-school years, Kathleen and Bernadeen directed and acted in elaborate programs presented at several venues, including the school and the opera house. Glen and Hal often sang and played roles in different acts of each play. At other times, he and Glen appeared as a duo, comically billing themselves as the Smith Brothers—Cough & Drop, and sometimes as the Smith Brothers—Trade & Mark.

(A nod goes to Tracy Negus Robertson, whom Jill and I met when we were guests at TAUNY in Canton in early December. While perusing one of my books, she noticed a story about a character from The Andy Griffith Show, Arnold Winkler, who was played by a child actor from Plattsburgh. She mentioned that Otis was from Massena, and that started me digging, which culminated in this five-part review of his remarkable life. Thanks, Tracy!)

Photos: Hal Smith; 1935 advertisement for Joe Calipari and His Kings of Rhythm; from the future, Hal with Andy Griffith and Don Knotts

A version of this article was first published on Adirondack Almanack.