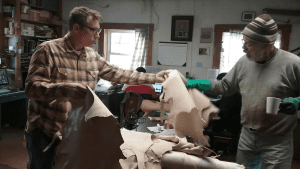 A walk around the Pergamena warehouse in Montgomery, NY in Orange County, is a step back in time. Rows upon rows of animal skins, of all kinds, are carefully laid on shelves, in piles and are in various stages of processing.

Some will turn into leather, some into parchment, some will become covers for drums and books, some will be made into shoes, handbags, dog collars, and the list goes on.

Pergamena – Italian for “parchment” – is a tanning business, and Jesse Meyer, co-owner with dad Karl and brother, Stephen, is providing this tour in a cold warehouse off of Montgomery’s Route 211.

It’s cold not because of a heating malfunction, but on purpose since these skins require certain climate conditions as they are tanned. “People think that tanning means I work in a salon,” Jesse says with a laugh. But in fact, he explains that the term “tanning,” comes from the term “tannin,” an ingredient found in trees, like oak and fir. Not to get too techy, but this tannin extract penetrates the skins so they remain durable and protected from decomposition. This is where we get our leather and suede, not to mention hundreds of other items and accessories. One item, native to the company’s homeland, is the “lederhosen,” a garment made for outdoor activities, like hunting and riding, but worn today mostly as a costume for Bavarian holidays. 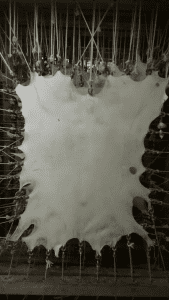 The first question off the top is “where do they get the skin?” From farms that raise cattle or goats, for example, the sorts of animals farmed for meat. The animals are skinned and the hides shipped to the Pergamena warehouse. For years, their big customers were piano and bowling shoe manufacturers, Jesse explains. “There’s leather inside piano to help with the smooth movement of the keys, and leather is also used in the bottom of bowling shoes to provide the gliding action.” A few examples on his busy desk are butter soft, and ready for the next phase. But, what? These days, there are less traditional pianos being constructed, and the popularity of bowling has its ups and downs. The Meyer’s job these days is coming up with new ways to use the skins, which require new ways to treat them, all to become more diversified. Like any other business, he says, we can’t fall back on just one or two products.

However, Pergamena is probably one of the last tanneries in the country, which can work in their favor. At one time, they received a call from Calvin Klein to provide leather for his home in Europe, so there is global recognition. “There are a few tanneries up in the Johnston-Gloversville area, but not very many,” Jesse says. They remained in business over the last few decades because Karl, “kept his head down, made a few niche products, and it worked for the last fifty years, but it’s time to reinvent new ways to use the product.”

Pergamena was founded by a Meyer ancestor around 1550 in Eisenburg, Germany, the country where the term “tanning” was born. “Tanna” – German for “oak” or “fir” – is named for the source of the chemical used to preserve animal skins. In the 1820’s the business came to America, by way of Philadelphia, then was in New Jersey for a few years, and in 1981, Karl brought it up to Orange County to consolidate the operation in a new building away from the gritty environment of urban New Jersey, and find a suitable location to his growing family. Father and sons, with employee, Joe Carmona, spend a good part of their day in layers of flannel shirts and woolen caps to work in the chilly warehouse, and perform what can only be described as back-breaking work as they sand, buff, and flatten the skins (with some very imposing machinery), soak the skins in tubs, and rotate them in large drums, before clipping them tightly onto racks.

For a historian, the business is fascinating since we see how this century’s old method of creating this paper-like product used by kings and queens to bestow land patents make grand announcements, proclamations, and even something called the Magna Carta and Declaration of Independence. In fact, the Orange County Clerk’s office has two immense parchments dating back to the County’s origins.

An animal skin destined to become parchment will be left untanned and clipped to a rack where it’s stretched and left to dry, with the skin fibers eventually being “glued” together. It can be handled at that point, and will last for a lifetime, and beyond. What used to take months, now takes only a few days with modern techniques that the Meyer men continue to tweak as they make the process healthier than it was four hundred years ago. “We’ve eliminated the harsh metal chemicals that have been used recently, so the process is more human-friendly,” Jesse explains.

Appointments for free group tours are available. Two-day tanning workshops are also given throughout the year, so check their website for details.