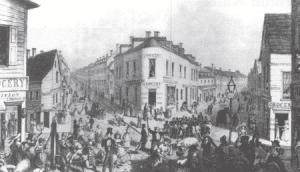 In reality, the rumors which inflamed the crowd were greatly exaggerated, lasted about a day and the vandalism which resulted was fairly minor, especially when compared to such later disturbances such as the Astor Place Riot or the colossal Draft Riots. Nonetheless, the Flour Riot was a significant affair because it underscored a growing divide in the city between New York’s prosperous merchant class and a quickly growing lower class of newly arrived Irish immigrants. The riot was also memorable because new method of communication, the “penny press,” had helped to inflame tensions. These cheap newspapers, widely available to the poor, had spread dangerous rumors and provoked a mob to attack a warehouse where flour was stored.

The Flour Riot of 1837 had long and complex gestation period and was the offspring of the Great Fire of 1835, when nearly 700 buildings were destroyed with an estimated total loss of $20 million. Depression settled over the country and there was an impact on food prices age. Flour sold for $7.00 and $12,00 a barrel, and then jumped to $20. Mass meetings were held and two companies in the city of New York – the Eli Hart & Co. (actually based in Troy) and S. H. Herrick & Co. – were accused of hoarding the flour.

It seems that on or about February 10th signs were posted throughout the city reading: “Bread! Meat! Rent! Fuel The voice of the people shall be heard and will prevail. The people will meet in the Park, [at City Hall] rain or shine at four o’clock Monday afternoon [February 13] to inquire into the cause of the present unexampled distress, and to devise a suitable remedy. All friends of humanity, determined to resist monopolists and extortionist, are invited to attend.”

At the appointed date and time a crowd estimated to be four to five thousand gathered to hear a succession of speakers rouse them on topics ranging from high rents, to monopolists, and most topically, to the price of flour. The final speaker, of unknown identity, rallied the crowed to move on Eli Hart & Co. saying:  “Fellow citizens, Mr. Eli Hart has now 53,000 barrels of flour in his store; let us go and offer him eight dollars a barrel for it and if he will not take it shall depart in peace.” It seems that the latter part of his statement was either not heard or ignored.

In either case on that bitterly cold and blustery day the crowd marched to Eli Hart’s warehouse on Washington Street between Dey and Cortlandt and upon hearing the roar of the mob the clerks there began locking the place up but in their haste, one door was inadvertently left open allowing the crowd to burst in and before long they were rolling out flour filled barrels and throwing out sacks of grain out onto the street below and carried away.

At one point Mr. Hart arrived with a detachment of New York City Watchmen who advanced toward the warehouse but they were attacked and disarmed by the crowd.  At dusk another contingent disaffected New Yorkers made a move on the E & J Herrick warehouse on South Street but left when a representative persuaded them Herrick sold its flour at fair prices.

This crowd then marched to Coenties Slip where the related S.H. Herrick & Son storehouse was. Meanwhile he mayor hurried to the scene, to address the crowd and urged them to desist and disperse, but was met with a hail stones and ice balls and he was forced to seek safety. Fortunately for him a contingent of the 27th Regiment of the New York Militia appeared on the scene and early that evening the Flour Riot was over.

All counted some 500 to 600 barrels of flour and a thousand bushels of flour, wheat and other grains had been stolen or destroyed and more than 40 people were arrested.

Ironically another result of the riot was that it strengthened the political clout of the merchant class who had been clamoring for a larger police force and within 24 hours a law passed that increased New York City Watchmen ranks by 192 officers.

This is a part of a series about 18th and 19th century racial and ethnic riots in the city of New York.