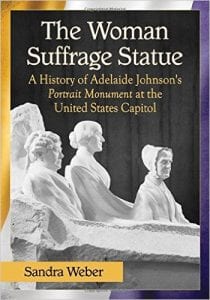 From its conception by sculptor Adelaide Johnson as separate busts in the 1890s, there was little hope of getting marble portraits of women into the United States Capitol; Congressmen didn’t want women – real or marble – “puttering around” on the hill. In 1920, as the ratification of the woman suffrage amendment appeared likely, the National Woman’s Party commissioned Johnson to sculpt new versions of the three busts and place them atop a large pedestal. The  artist decided to merge the busts and pedestal into one large, group sculpture, an extremely difficult and risky task.

Despite earthquakes, labor strikes, and quirky accidents at her studio in Carrara, Italy, Johnson completed the monument and placed it aboard an ocean-liner on January 1, 1921.

Despite women having the vote, it was still no easy task getting a suffrage statue into the Capitol. First, a Congressional committee, whose members labeled it ugly and “three women in a bathtub,” had to be convinced to accept it, then the 7-ton monument had to be moved up the steps and into the Rotunda. It did not fall through the floor as predicted, but the day after the grand unveiling ceremony, the monument was moved to the lower floor, known as the Crypt.

Some people continued to visit the statue and hold celebrations in the Crypt, yet the statue was often neglected or misrepresented by the Capitol guides. Also, the inscription on the back was erased. After 76 years, the woman suffrage statue went back upstairs to the Rotunda, but not without some hostile political battles and tricky maneuvering through a narrow staircase.

Since the statue is the national symbol of the woman’s movement, the book also speaks to the larger issues of woman’s rights.

Sandra Weber writes about woman’s history and the Adirondack region, and lives just a few miles from the grave of Inez Milholland in Lewis, New York. For more information, visit her website.