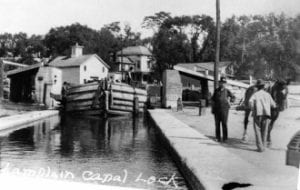 Historians, museums, libraries, cultural groups, political leaders and community members are invited to a roundtable discussion on “Social Reform Movements of the 19th Century in the Champlain Canal Region of New York” on Friday, January 20 from 10 am to 2 pm in the Schuyler Room of the Saratoga Town Hall.

Stories gathered at the roundtable will be used to design public humanities programs on themes related to social reform movements during the Industrial Revolution.

The roundtable discussion highlights how the Industrial Revolution reshaped the fabric of society as rural communities transitioned to industrial societies with technological, economic and political repercussions. The cultural disruption triggered social reform with statewide and national impacts as voices were heard in the Champlain Canal region calling for workers’ rights, women’s suffrage, abolition, the Underground Railroad, and new religious communities emerged. The discussion will be facilitated by two humanities scholars, John Patterson, former Associate Professor of American Studies and History at Penn State Harrisburg, and Robert Weible, former State Historian and Chief Curator of the New York State Museum.

If the roundtable is canceled due to weather conditions, it will be rescheduled for Friday, January 27, 2016. The Saratoga Town Hall is located at 12 Spring Street, Schuylerville. The workshop is free and open to the public. Lunch and refreshments will be provided for $15. Registration is required, contact Margaret Gibbs, Lakes to Locks Passage Heritage Program Director at mgibbs@lakestolocks.org.

The workshop is sponsored by Lakes to Locks Passage, a nonprofit organization with the mission to inspire people to discover, honor, celebrate and share the stories that connect our lives and foster vibrant communities for future generations.