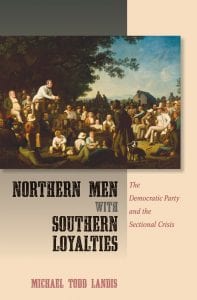 In the decade before the Civil War, Northern Democrats, although they represented antislavery and free-state constituencies, made possible the passage of such pro-slavery legislation as the Compromise of 1850 and Fugitive Slave Law of the same year, the Kansas-Nebraska Act of 1854, and the Lecompton Constitution of 1858.

In Northern Men with Southern Loyalties: The Democratic Party and the Sectional Crisis (Cornell University Press, 2016) author Michael Todd Landis contends that a full understanding of the Civil War and its causes is impossible without a careful examination of Northern Democrats and their proslavery sentiments and activities.

Landis focuses on a variety of key Democratic politicians, such as Stephen Douglas, William Marcy, and Jesse Bright, to unravel the puzzle of Northern Democratic political allegiance to the South. As congressmen, state party bosses, convention wire-pullers, cabinet officials, and presidents, these men produced the legislation and policies that led to the fragmentation of the party and catastrophic disunion.

Through examination of correspondence, speeches, public and private utterances, memoirs, and personal anecdotes, Landis lays bare the desires and designs of Northern Democrats. He ventures into the complex realm of state politics and party mechanics, drawing connections between national events and district and state activity as well as between partisan dynamics and national policy.

Northern Democrats had to walk a perilously thin line between loyalty to the Southern party leaders and answering to their free-state constituents. If Northern Democrats sought high office, they would have to cater to the “Slave Power.” Yet, if they hoped for election at home, they had to convince voters that they were not mere lackeys of the Southern grandees.