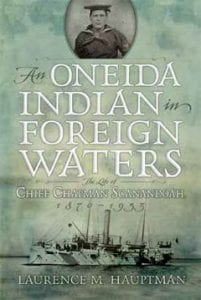 He was also a historian, linguist, philosopher, and early leader of the Oneida land claims movement. However, his fame among the Oneida people and among many of his contemporaries today rests with his career as an inventor.

In the era of Thomas Edison, Scanandoah challenged the stereotypes of the day that too often portrayed Native Americans as primitive, pre-technological, and removed from modernity.

In An Oneida Indian in Foreign Waters, Hauptman draws from Scanandoah’s own letters; his court, legislative, and congressional testimony; military records; and forty years of fieldwork experience to chronicle his remarkable life and understand the vital influence Scanandoah had on the fate of his people.

Despite being away from his homeland for much of his life, Scanandoah fought tirelessly in federal courts to prevent the loss of the last remaining Oneida lands in New York State. Without Scanandoah and his extended Hanyoust family, Oneida existence in New York might have been permanently extinguished.

Hauptman’s biography not only illuminates the extraordinary life of Scanandoah but also sheds new light on the struggle to maintain tribal identity in the face of an increasingly diminished homeland.