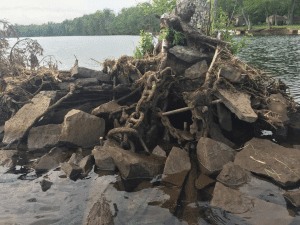 Recently my son Adam and his daughter were canoeing on the Hudson River above the Feeder Dam in Glens Falls when they noticed a small tree growing atop an old stone pier about 30 feet from shore – and something more. Tangled in the roots, they found a large old rusted chain with links 4 inches wide by 6 inches long.

Sharing pictures with Richard “Dick” Nason, the unofficial Finch Pruyn Paper Company historian and an authority on river log drives, it appears likely the chain was left over from the heyday of log drives on the Hudson River.

The chain was found in the Big Boom sorting area. Logs were released from the Big Boom upriver and floated down to the sorting area where they were tallied by owners, identified by the owner’s mark stamped on the butt end of each log. The sorting area was used from 1851 to 1929. Dick suspects the chain may be from the late 1800s.

In the past few years the Hudson River-Black River Regulatory System has kept the Hudson River levels higher than in the past. During the winter this has allowed ice to raft off trees, shrubs, and even the top layers of the old cribwork in the river. Stones and logs from the old piers have also shifted, adding to a navigation hazard to this section of the river as the old cribwork now sometimes lie just beneath the surface. It’s likely these forces brought the old chain to the surface. 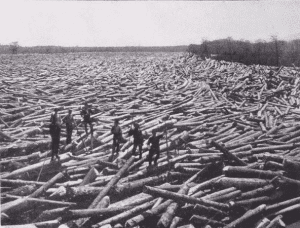 Since the early days of logging the Adirondacks men corralled logs on the river with small booms, but these were regularly swept away. In 1849 the sawmills in Glens Falls joined with timber companies to form the Hudson River Boom Association. The association built a substantial series of stone piers and a system of chain booms at the Big Bend, a hairpin turn in the Hudson River about 4 miles upriver of the great falls at Glens Falls.

According to a report in 1859, quoted in Harold Hochschild’s classic Township 34, the boom “was made of heavy, hewn timbers, four of them bolted together raftwise. The ends of the groups were connected by chains, which worked over friction rollers, to allow the boom to accommodate itself to the motion of the water. Each end of the boom was secured to a heavy abutment by chains.” The purpose of the boom was to prevent logs from escaping further down the river. In 1859, when the Big Boom broke, “freed” logs escaped all the way to Troy, 40 miles away.

It is hard to say when the first Adirondack river drives began. Historical records indicate that logs had been rafted down the Hudson River to Albany as early as 1758. In 1813 the Fox Brothers were the first to float individual logs down the river. The logs were from the Brant Lake Tract, a spectacular large rectangular-shaped plot of thick pine forest that ran from Schroon Lake’s southeastern shore all the way to Brant Lake. It was a logger’s paradise, thick with white pine that grew 130 to 160 in height and were up to four feet in diameter. The Fox brothers sent their logs down the Schroon River (originally called the East Branch of the Hudson River) to Warrensburg and then on to the sawmills in Glens Falls.

Although log drives typically took 60 to 100 days each spring, it could take as long as two or more years for individual logs to make it all the way to Glens Falls, as every year some got hung up in eddies or on rock ledges.

When the logs finally arrived in Glens Falls the river crews were paid in full. Far too many took their paychecks to South Street. It’s said that John Donahue, an agent for Finch Pruyn, often send his workers’ money directly to the mothers and wives of his crews, so he didn’t have to face these women if their men returned home with little or no money.

These river runs revolutionized the logging industry. No longer would these be small local operations focused exclusively on local consumption. According to Dick Nason, from 1851 to 1929 over 5 billion board feet of timber came down the river to the sawmills in Glens Falls. New York State became a major exporter of structural lumber due, in no small part, to the sawmills in Glens Falls and the logs from Adirondack forests that were fed down to them on the Hudson River.

After being sawed into lumber much of it was sent to Troy and Albany where the docks were lined with lumber by way of the Champlain Canal and from there shipped west on the Erie Canal or south to New York City and the Atlantic Seaboard. In addition to needing the lumber for wooden buildings, timbers were needed for railroads; in 1870 alone the expansion of railroad lines in the country required 39 million cross ties. Glens Falls became one of the wealthiest small cities in the country at that time, based primarily on the lumber industry.

According to the records of the Hudson River Boom Association, logging in the upper Hudson watershed peaked in 1872. That year 18 logging companies sent over 2 million individual logs totaling over 213 million board feet of lumber downriver to the sawmills in Glens Falls. But then this activity slowed; from 1900 to 1929 only 1.2 billion board feet of logs were floated down the river.

About 1900 some companies included four-foot pulpwood in the river drive. As wood from Adirondack logs began to be used to make paper, shorter pulp logs replaced the more difficult to drive 13-foot Adirondack logs. Finch Pruyn closed their sawmill in November of 1924, but short pulpwood for papermaking continued in the river runs until 1950 when Finch Pruyn ended their use of the river as a means of transportation. 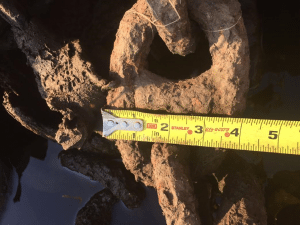 In 1958 the Johnsburg Fish and Game Club held the first White Water Derby to commemorate the days of the log drives with a canoe race down the Hudson in North Creek. In 1964, Life magazine sent a crew to film the race, but they promptly lost two cameras in the river. Among the celebrities that have participated in the Annual White Water Derby were Senator Robert Kennedy and Secretary of the Department of Interior Stewart Udall.

In 1977, Sports Illustrated ran a six-page spread and in 1978 national coverage included a two-page article in Time magazine. The White Water Derby in North Creek continues to this day and is held the first full weekend in May each year when the river usually runs fast, topped with cresting white water.

Even today a straggler log, left over from river runs of years ago, surfaces from the silt of the Hudson River.

That old rusted chain wrapped around a stump in the river is a reminder of a rich and colorful past.