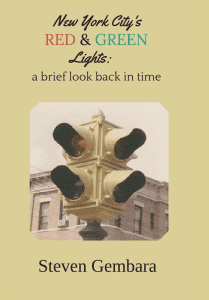 When it comes to traffic signals, most people overlook them, but many are unaware that there is a history behind them.

Steven Gembara’s new book New York City’s Red and Green Lights: a Brief Look Back in Time (FastPencil, 2015) offers a unique perspective on the two-color traffic signal’s existence in the 20th century in New York City and how it helped evolved the city’s streets to what they are in the modern day.

At one time two-color stoplights, which displayed only red and green signals to motorists, evolved from a form where red overlapped green, and both appeared lit for several seconds before the green light terminated. In the late 1990s and early 2000s, some of these traffic signals remained in service in areas of Queens, like Ozone Park, Richmond Hill, and the Rockaways.

Steven Gembara currently reside in southern New Jersey, but is a native New Yorker. He lived on Staten Island for 16 years, and, at an early age, developed a fondness of traffic signals.