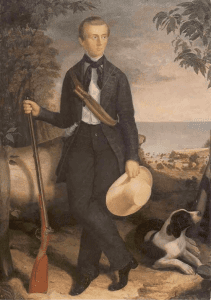 Millard Powers Fillmore, or “Powers” as he was commonly known, was a Harvard educated man. An avid outdoor’s man trained in the law, Powers held a position in the White House by the age of twenty-two, serving as his father’s personal secretary.

He was short and stout, but handsome like his father, and had gained a reputation as a “good lawyer and sound thinker,” at a young age. His circumstances probably provided him plenty of opportunities to fraternize with women and other social elites of the time.

Yet Powers was a shy man who “held himself completely aloof from the giddy whirl of society.” Though he maintained a successful law practice when he returned to Buffalo, he never appeared in court or returned a social visit. “His timidity was morbid,” described Powers’ former law partner E. Carlton Sprague. At the root of Powers’ introverted personality, was the great family tragedies he had suffered. Just as his father’s time in the White House expired, Powers lost his mother to an illness. A year later, Abbie Fillmore, Powers’ twenty-two year old sister, died unexpectedly, the victim of a cholera outbreak. Powers had adored his family, especially his sister who possessed the charm and fondness for society that Powers lacked. Her death and that of his mother “cast a gloom over his life from which he never recovered.”

Powers was also deeply affected by the results of his father’s tenure as President. He credited his father with saving the country amidst the tumultuous debate that ultimately lead to the Compromise of 1850. Catapulted into the office by the sudden death of Zachary Taylor, the elder Fillmore accepted the resignations of Taylor’s cabinet members and filled the vacancies with supporters of the compromise. Only two months after taking office, Fillmore signed the Compromise of 1850 into law avoiding a conflict within the fledgling nation. The public, however, did not perceive the recently defeated president as a savior. Instead, the remaining Fillmores were met in Buffalo by a “storm of obloquy.” 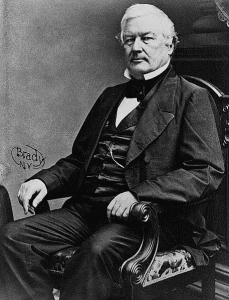 To escape the grief of the personal and political tragedies, the elder Fillmore traveled abroad for year. Shortly after returning, he met wealthy widow Caroline McIntosh at a social function in Albany, at the urging of Louisa Tubbs Harris, the wife of prominent judge and future United States Senator Ira Harris. Initially reluctant to meet Caroline, Fillmore soon warmed to her and began a correspondence. Before long, Fillmore made an official proposal of marriage which was not immediately answered by Caroline. At the heart of Caroline’s reluctance was the logistics and finances of the potential marriage.

Caroline was not unwilling to leave her lavish residence in Albany, the famous Schuyler mansion, nor did she see Fillmore as an unattractive mate. However, she was concerned about finding a home that would suit the needs of her and the former president. She was also eager to protect the large fortune she inherited from her late husband Ezekiel McIntosh. Mr. McIntosh had been a railroad tycoon who acquired immense wealth during his career. In 1847, Mr. McIntosh, who was also politically connected, worked with the opponents of then lawyer and politician Millard Fillmore to defeat his bid for the office of New York State Comptroller. McIntosh was given $20,000 to place in a private back account which was to be used against Fillmore’s candidacy. However, before the funds could be put to their intended use, the fundraiser died. Fillmore was elected comptroller later that year. According several newspaper sources, the $20,000 remained in that bank account for several years only to be given to Fillmore as part of a dowry when he married Caroline.

Ira Harris arranged a final meeting between Fillmore and Caroline in Saratoga before the arrangements of the marriage were hashed out. Caroline would move to Buffalo to live with Fillmore in a mansion purchased with both of their money. The new “castle” was a departure from the somewhat modest estate Fillmore previously inhabited.

The two wed on February 10, 1858, at Caroline’s home in Albany. The wedding was a private affair, officiated by Reverend William Hague, a popular Baptist minister known for his “attractive oratory,” and attended by handful of close friends and family. After the ceremony, the wedding party was treated to a performance by the band of the 76th regiment before retiring to the Delavan House across town. By all accounts, it was a tidy affair; small, but elegant, with the historic Schuyler mansion perhaps providing most of the charm that might have been absent from the aging couple.

Fillmore and Caroline were not he first prominent couple to marry at the mansion. In 1780, Alexander Hamilton married General Phillip Schuyler’s daughter Elizabeth in affair that was likely similar the wedding held seventy-eight years later. The union between Hamilton and Schuyler was witnessed by Schuyler’s family in keeping with the old Dutch tradition of small family weddings. On Hamilton’s side, however, only his friend James McHenry, an officer on General George Washington’s staff, was able to attend. Neither Hamilton’s father or brother made the voyage to America, likely remaining in St. Thomas where Hamilton was born. Hamilton’s biographer Ron Chernow pointed out, the uneven wedding parties probably presented a “mortifying contrast,” leaving Hamilton a “lonely groom.”

Fillmore too might have fit the bill as a lonely groom when he wed Caroline on that winter day in 1858. Records indicate that only a few friends traveled to Albany in support of the former president. Judge Nathan Hall, Fillmore’s close friend and political ally, was one of them. To add to the potential awkwardness, Hall had recently been retained as Fillmore’s lawyer, negotiating a prenuptial agreement between Fillmore and Caroline. Caroline insisted on protecting her assets, enlisting the help of her friend and matchmaker, Ira Harris, to work with Hall in striking a legal arrangement. The agreement the two parties settled on left Caroline’s fortune in her own name, while granting Fillmore authority to manage it for a fee. Upon either’s death, the living spouse would inherit what remained of other’s fortune.

The arrangement seemed straight forward, if somewhat unusual for the time. However, the contract did not explicitly account for Powers, who lived with Caroline even after his father’s death in 1874. When Caroline died in 1881, she left Powers money in her will, but left control of the Buffalo mansion and its contents to George Gorham, her executor. Powers contested Gorham’s claim to the estate triggering a long legal battle. Represented for a time by his friend and future president Grover Cleveland, Powers argued that much of the property left to the executor was rightfully his having been acquired before Fillmore’s marriage to Caroline. Among the items claimed by Powers was silver that had been gifted to his biological mother before her death, a vast library of books which had been acquired by his father, and a large stock of wine.

The sixth clause in the prenuptial agreement was scrutinized in courts across New York. It read, “All the furniture, plate, horses, carriages and other personal property in use by the parties for family purposes, at the time of the death of either, shall vest absolutely in the survivor.” Powers’ legal team argued that the language in that clause did not include the personal items Powers refused to surrender. Eventually, the case made it all the way to the New York State Court of Appeals where Powers received a favorable judgement. New York’s highest court ruled that most of the items Powers claimed were not used in the house, instead they were heirlooms which was not covered by the language of the prenuptial agreement. Powers died a lifelong bachelor a year later at the age of sixty-one.

The nature of the relationship between Powers and his stepmother is a bit of a mystery. Powers had all his personal correspondence destroyed at the time of his death, some speculating that he wished to hide his feelings about Caroline. It’s not a stretch to assume Powers resented not being named the executor of Carline’s estate. It’s also not a grasp to believe he never approved of his father’s second marriage. Perhaps the elder Fillmore’s will, penned in 1865, sheds some light. “If she [Caroline] and my son Millard Powers shall both survive me,” he wrote, “I hope and trust that they may love each other as I have loved them.” Did the fact that Fillmore expressed hope for their relationship in the future say anything about their relationship in the past? It may never be known.