Joseph McGill, founder of the Slave Dwelling Project, will spend Friday night, September 9th, in a cellar kitchen at Historic Huguenot Street in New Paltz as part of the historian’s ongoing mission to bring awareness to former slave dwellings’ existence, history, and need for preservation.

Six SUNY New Paltz students and several members of the public will be invited to join McGill and his associate Terry James to share in this symbolic return to a time when even northern households enslaved Africans.

The next night, on September 10th, the Historic Huguenot Street non-profit organization will host a special reception, during which McGill and James will discuss the previous night’s experience in the 300 year-old cellar at Huguenot Street and their mission to preserve historic slave dwellings. Additionally, Historic Huguenot Street will unveil for public viewing a steel slave collar, donated in 2010 by a descendant of the historic site, that was owned by the very same family — the Hardenberghs — that once enslaved renowned abolitionist and former Ulster County resident Sojourner Truth.

A descendant of slaves, Joseph McGill founded the Slave Dwelling Project in 2010, having worked for the National Trust for Historic Preservation in Charleston, SC, and recognizing the need for preservation of historic slave dwellings. Since 2010, McGill has spent the night in dozens of slave dwellings throughout the country, at times even in antebellum wrist shackles. This will be McGill’s second overnight in a historic New York State slave dwelling, following his visit to a historic Long Island residence last year, which was covered by the New York Times. McGill will be joined by Terry James, who has slept in over 40 slave dwellings in shackles to commemorate the 10.7 million enslaved ancestors who survived the Middle Passage. 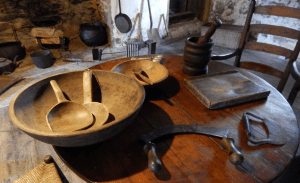 In recent years, Historic Huguenot Street has made a conscientious effort to interpret Northern slavery. Directly influenced by the story of Ulster County freed slave and abolitionist Sojourner Truth by means of her autobiography, guests of Historic Huguenot Street visit the site’s slave dwellings to explore the reality of slavery in the Hudson Valley. All of the Huguenot families who settled New Paltz are known to have enslaved Africans as evidenced by wills, registers, runaway slave notices, and other documents held in the organization’s historic archives.

The first records for slave holdings in New Paltz began in 1674 with the purchase of two enslaved Africans in Kingston. In the North, the enslaved typically lived in close proximity to their slaveholders, housed in basements, attics, and possibly outbuildings that have since disappeared. According to archival documents, some of the enslaved’s names included Rachel, Dina, Pegg, Sampson, Sime, James “P,” and Molly.

“It is important to be clear about the paradox inherent to this community’s use of enslaved African labor,” said Board Chair and Huguenot descendant, Mary Etta Schneider. “My ancestors fled France for religious and political freedom. Before leaving France they saw their own families tortured, enslaved, and killed. Yet these emigrants came to the New World and, for their own personal gain, forced other human beings to labor against their will. For this I am ashamed.” By exploring the narrative of the enslaved, Historic Huguenot Street hopes to shed light on the history of northern slavery, not just from the prospective of slave owners, but from the perspective of those enslaved.

The September 10th reception will be held from 5 – 7:30 pm at the DuBois Fort Visitor Center, 81 Huguenot Street, New Paltz, and will feature a discussion with McGill and James regarding their previous night’s experience in the cellar kitchens, and their mission to preserve historic slave dwellings.

Sponsorships for the reception, which will serve as a fundraising event for the New Paltz-based nonprofit organization, are also available. To register and for more information, click here.

This event is being organized in collaboration with the Black Studies Department at SUNY New Paltz. This program is made possible with the generous support from Drs. Thomas and Corrine Nyquist, Mary Etta Schneider, Grace Angela Henry, Dr. A.J. and Janice Williams-Myers, and Audrey Coons Foster. Organizational sponsors include The 1850 House & Tavern and SUNY New Paltz.

A National Historic Landmark District, Historic Huguenot Street encompasses 30 buildings across 10 acres that was the heart of the original 1678 New Paltz settlement, including seven stone houses that date to the early eighteenth century.