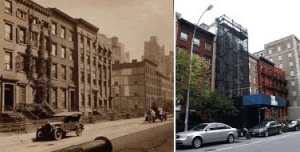 The house and the row was designated as an historic district for cultural reasons – the family of no. 339 was violently attacked in the 1863 Draft Riots for harboring runaway slaves. The abolitionists escaped via the rooftop, hopping house to house until ultimately making a safe exit through a neighboring home.

This house and row has remained essentially intact until its current owner illegally constructed a 5th story addition after a Landmarks Preservation Commission (LPC) designation. This 5th floor eliminates the escape path for which this row was supposed to be protected. On Sept. 20, the owner will apply to the LPC for forgiveness for this, and is attempting to legalize this addition.

Advocates won in court, most recently at the NY State Supreme Court Appellate Division, which ruled that this rooftop is illegal and was constructed after LPC designation. The DOB subsequently issued an order to correct to remove this 5th floor and return it to its original 4 stories, yet it still stands.

According to the Historic Districts Council, correspondence with LPC regarding this addition’s fundamental legality has been ignored, and the agency has described this grave problem in the public hearing docket as an “application to modify rooftop and rear yard additions constructed prior to designation” despite the determination of the courts and the vocality of advocates and elected officials including Manhattan Borough President Gale Brewer, CM Corey Johnson and Assemblymember Richard Gottfried, all who worked hard to make sure that this landmark is protected. Despite this, the owner is asking the LPC to rubber stamp this rooftop addition. Even worse, this application includes a “restoration” of the facade, which the same owner stripped and stuccoed years earlier.

The Historic Districts Council is imploring the LPC to not hear this application regarding the rooftop addition until the owner has corrected the violation and the illegal work has been removed. The Council is asking that Preservation advocates click here to write to the LPC.

Photo of the Hopper-Gibbons House provided by the Historic Districts Council.