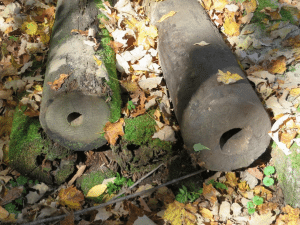 When you turn on your kitchen faucet you probably don’t give it much thought, yet it’s a marvel of modern history.

For centuries, to get water into the house it was necessary to fill your buckets from a fast moving stream and lug them home. Later, you might have filled them from a well or cistern, but still had the chore of lugging them back to the house. Every drop of water you wanted for drinking, cooking or washing had to be transported this way and it was a seemingly endless task. In winter, you might have to carry an axe with you so you could break through the ice that had formed overnight. Here in the Adirondacks, wells were sometimes dug right under the house so getting water wouldn’t be quite so arduous, especially in winter. Common indoor plumbing with water to a faucet didn’t arrive in most homes in the Adirondacks until the 20th century. But there were exceptions, one of which was the LeRay Mansion near the town of Leraysville in Jefferson County. 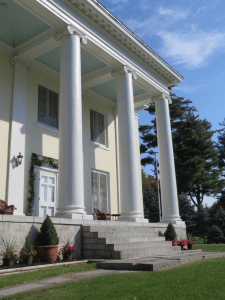 The original LeRay Mansion was built 1806-1808. Recent research by Ted Bartlett and Randy Crawford of Crawford and Stearns, and others, have determined that the original mansion probably burned about 1822 but was re-built between 1826-1827. It’s a gorgeous example of Classic Revival architecture and has been described as one of the most beautiful homes in America, a glorious sight in the midst of raw wilderness.

Donatien LeRay de Chaumont, controlled a shipping empire. With the dowry from his marriage to Marie-Therese Jogies des Ormaneaux, a French Aristocrat, he purchased the beautiful and famous Chaumont-sur- Loire, from whence he got his formal name. Rich clay deposits were discovered on the property and a pottery business developed. Jacques also established a highly profitable glassmaking works. He also was the first person to strike at the British textile monopoly by establishing his own cotton-spinning facility and by the time of the American Revolution he was one of the richest men in France. A successful merchant and a believer in liberty, Jacque invested much of his personal fortune in supporting the Patriot cause during the Revolution. He hosted the American delegation, including Benjamin Franklin, at his mansion outside of Paris during the war and it is said he provided John Paul Jones with a fleet of ships at his own expense when the Continental Congress could not afford to provide Jones with a single ship. Jacques, as agent for King Louis XVI, also invested substantial sums from the French treasury in the American cause. Although the Americans won, Congress was only willing to pay back their loans in wildly depreciating, almost worthless, scrip. Many historians today believe this ultimately bankrupted France and, in turn, triggered the French Revolution. In the midst of the French Revolution Jacques’ own assets, including his beloved Chateau at Chaumond-sur- Loire, were seized and he died deeply in debt in 1803.

James LeRay was now saddled with his father’s debts. James had come to America in 1802 to plead to Congress for the money owed his family. Those pleas fell on deaf ears; the Continental Treasury was empty after all the expenses of the war. James then tried to win back the family fortune by borrowing heavily and purchasing thousands of acres of land in the Adirondacks wilderness. At one time his holdings totaled over 350,000 acres and comprised much of what today is Lewis, Jefferson, Franklin and St. Lawrence Counties.

To insure his reputation and influence, on this land James LeRay had a magnificent mansion built. Interior doors were of cherry and burl maple. There were four fireplaces faced with exquisite gray Italian marble veneer and the best china and silver money could buy adored the table. Window hangings were of the heaviest silk or brocade and fine leather bound books filled its library. A lifestyle of conspicuous consumption was, for a time, supported by newly opened iron mines, sheep farms, and even an experiment in silk farming. 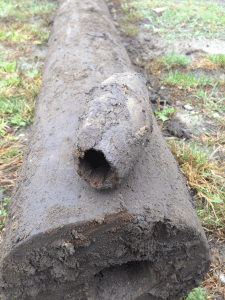 Rare for its day, the mansion had running water year round. The pipes kept water flowing using a simple gravity feed. The water pipes were set at a very gentle grade so that the water would always run downhill to the Mansion kitchen, yet not arrive with too much force. There was likely a cistern or well structure in the kitchen to store the water for convenient use and the system was designed so that any excess water would flow back into the stream outside. It’s possible James LeRay’s son Vincent (for whom Cape Vincent is named) might have designed or improved the system since Vincent was an engineering graduate of the Ecole Polytechnic Francaise.

Unfortunately the investment in the Adirondack wilderness failed to generate a respectable return. James, like his father before him and deeply in debt, became insolvent. He returned to France in 1836 a broken man and died there in 1840. The house was sold to French Engineer Jules Payen who updated and improved the water system. With World War Two looming, in 1941 an expanding Fort Drum needed more room and through eminent domain purchased the mansion and its remaining 200 acres as well as the village of Leraysville. Today the mansion is used for special occasions and important guest lodging at Fort Drum and has been wonderfully preserved complete with reproduction period furniture. 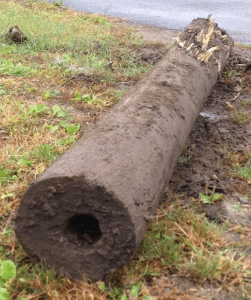 Dr. Duane Quates, in an interview for the Fort Drum newspaper in 2014 indicated “making the wooden pipes in the early 1800s was a long and tedious process. Quates postulated that ‘They burned out the center (of the log) and scooped out the center with a spoon auger…They would sit there and turn it around in the burnt-out center of the log…alternating burning and augering until they got all the way through. It was a (time-consuming) process.” I personally wonder if they might have used a red-hot circular metal tube from the blacksmith’s shop to effect what is a marvelously consistent hole.

Individual sections were connected together by pounding simple hollowed out wood ovular joint pieces onto the end of each log length, holding the assembled piece together solely through friction. In later years copper plates were used to connect the water pipe lengths.

The wood of the water pipes was determined to be hemlock. Because of the high water table in the area, the hemlock water pipes, thought to be almost two hundred years old, were found to be remarkably in good condition when unearthed and even after almost 200 years of disuse and disrepair the pipes carried a flow of water.

Sections of the old wooden water lines have been shared with area museums. The LeRay Mansion is periodically open to the public, overseen by the Army Morale, Recreation and Welfare Office at Fort Drum.