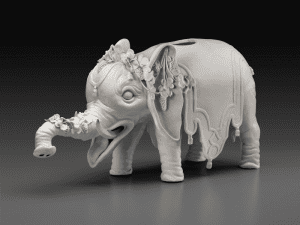 The Frick Collection has announced a gift from Paul Sullivan and Trustee Melinda Martin Sullivan of porcelain produced by the Du Paquier Porcelain Manufactory in Vienna.

The Sullivans permitted the Frick to choose fourteen examples from their collection, dating from 1720 to 1740, considered to be one of finest private collections in the world from this important early Western manufactory.

Henry Clay Frick, upon whose holdings The Frick Collection was founded, focused his porcelain collecting on Sèvres, which accompanied the eighteenth-century French paintings and furniture he acquired.  In 1966, his collection of Chinese porcelain was augmented by some two hundred pieces through the bequest of his son, Childs. The museum’s holdings were further extended by recent gifts of Meissen porcelain from Henry Arnhold. Now, the Sullivan’s gift of Du Paquier porcelain adds to the Frick’s already strong assemblage, which illustrates the Western fascination with Eastern models and represents the distinctive tradition of porcelain production in Europe.

Starting September 28, these works will be on view in the Frick’s Reception Hall, remaining there through March 2017.