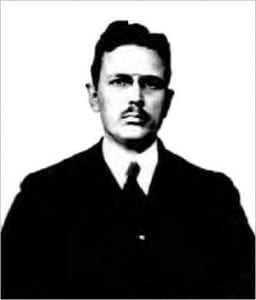 Karl Telford Frederick was born in 1881 in Chateaugay (northern Franklin County), where his father was a Presbyterian minister, which required a somewhat nomadic existence (five relocations in 14 years). Before Karl was three, the family moved to Essex on Lake Champlain, remaining there until 1888—not a long time, but sufficient to establish a lasting connection between him and the Adirondacks.

While living in Manhattan, Frederick began practicing law from an office on Wall Street. In 1912 he joined the New York National Guard, becoming a member of Squadron A, which was based in the grand, castle-like armory on Madison Avenue. This elite cavalry unit, known for its riding skills and classy uniforms, was often called upon to escort presidents and other visiting dignitaries. Their expertise covered many disciplines, including shooting (in the armory’s underground, 200-foot-long target range), giving Karl a chance to sharpen the skills he had first honed at Princeton.

Without neglecting a busy legal practice, he developed into an uncanny marksman, and in 1920, at the age of 39, he qualified for the U.S. Olympic Shooting Team. In the games at Antwerp, Belgium, the Americans dominated both the pistol and rifle competitions, led by Frederick, who won three gold medals—two in the team pistol events at 30 and 50 meters, and one in the 50-meter free pistol category. He narrowly missed a bronze, finishing fifth in the 30-meter free pistol competition. Besides the medals, he was awarded a trophy as the World’s Individual Pistol Shooting Champion.

Winning three gold medals for his country wasn’t Karl’s only contribution to the nation’s Olympic efforts. He served the committee but didn’t compete in the 1924 games in Paris, and Olympic shooting events were not held in 1928. But beginning in 1932, he chaired America’s Olympic Shooting Committee for three decades, until shortly before his death in 1963 (he had again been selected as chair in 1961 for the ’64 games). During that time, he also captained the team in 1932, and served as both captain and manager in 1948.

Aside from the games held every four years, Karl excelled in other events, representing America in several international meets, including three overseas trips. Among his numerous awards were five medals representing first place in world competitions.

In the city of Rye, New York, on the Long Island Sound, where he lived for the last 20 years of his life, Karl became a community leader, belonging to a half dozen clubs and several committees in local government. He contributed substantially to the city’s growth during two terms as mayor, and served as a deputy commissioner for the Auxiliary Police Division during World War II by providing small-arms instruction. In time, that effort blossomed into the Rye Gun Club, which for years won nearly every competition held in Westchester County. At the request of Rye’s police department, he developed a shooting qualification program that included courses of instruction and hands-on training by the great champion himself.

Decades of his life were spent teaching gun safety to citizens, hunters, lawmen, and members of the military. After instruction and training sessions with him, many individuals from those same groups competed in and won shooting events.

Karl Frederick, shooter extraordinaire, passed away in 1963 at the age of 82. His three-gold-medal performance at Antwerp in 1920 remains the standard for North Country summer Olympians.

Next week: another side of Karl Frederick—Adirondack and national conservationist.