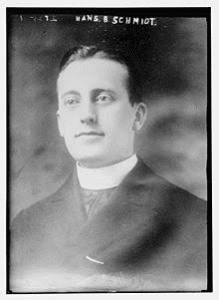 On September 5, 1913, Mary Bann, of Woodcliff, New Jersey, and a male companion, were walking near an abandoned dock near the New Jersey side of the Hudson River, when she spotted a bundle resting near the riverbank. It was wrapped in brown paper and tied with twine, and fairly large in size. Though her companion wished to dissuade her from getting near it, Mary had a stubborn mind, thus she hiked down to the side of the river and grabbed the package. She untied the string, unfurled the brown paper and the newspaper under it, and was soon shocked by the sight: it was the upper torso of a young woman. Her companion quickly hurried to find a policeman.

Two days later, a man walking his dog found a similar bundle. Inside it was the lower portion of the torso. This was taken to the Hoboken Morgue, where the upper torso resided, and where the rest of the body pieces would arrive in the next day or so, as they washed up. Two days after that, a fisherman dangling his fishing rod from a pier brought up something heavy; as he swung his hook, the weight slipped off, but on his hook were clumps of hair he recognized as human. He notified the police, who immediately arrived on the scene feeling that perhaps the victim’s head had been found. The harbor police dragged the waters with grappling irons, but found nothing, fearing that now the currents had washed the head downriver.

Given that the body parts had been wrapped in a New York newspaper, detectives from that city took over the investigation. It was Inspector Faurot who circulated a description of what they believed the victim looked like, a young woman of eighteen to twenty-five years of age, of not more than five feet three inches tall, with likely dark brown hair, well nourished, and with a very distinctive birthmark on her shoulders. She had also been pregnant, scheduled to give birth in four months or so. 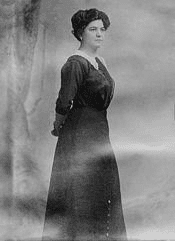 The descriptions brought forth several individuals with missing relatives, but through skilled detective work those individuals were later found, until Anne Hirt showed up, a servant girl at the Church of St. Boniface, in New York, who had contacted the police with word that her friend, Anna Aumuller, had not been seen in days. Anna Aumuller had also a very distinguished birthmark on her shoulder, and had recently spoken of a pregnancy. Brought to the morgue in Hoboken Anne Hirt was shown the remains. Before fainting, she identified the dead woman as Anna Aumuller.

Anna Aumuller was just a few months past her twentieth birthday, and had arrived in America some five years earlier. Both of her parents had died, and though she had many brothers and sisters, they all lived in Germany, her only relative in America a cousin who worked as a boatman in Central Park, a man she hadn’t seen in nearly a year. She had worked a governess and a nanny, but lately had been employed at the St. Boniface Church. There was a loneliness about her that followed her like a cat, Anne Hirt said, though lately she had seemed happier. Anna had admitted to her employer, Father John S. Brown, that she was soon to marry, though she had not given him any more details than that, and to her friend Anne Hirt, she had said she was going to marry an artist. She had recently moved to a new apartment, at 68 Broadhurst Avenue, which she had described as a nice place, though Anne Hirt had yet to visit it.

Inspector Faurot and his detectives hurried to the apartment, but no one answered their knocks. On breaking down the door, they found evidence of a life that had barely just gotten started: a half dozen eggs and the remains of a bread roll; several empty bottles of milk; a sugar bowl and four empty bottles of ginger ale, which police believed she had swallowed to help her with the pregnancy nausea; ink and paper; some flimsy underwear and a few pieces of clothing for an infant. Receipts dated days earlier were also scattered on a table, and a lease on the apartment under the name of Hans Schmidt was found in a drawer.

But they also found evidence that a crime had been committed: a carpenter’s saw; a long-bladed butcher’s knife; bleached out spots on the walls and carpets; dried blood in the tub. Also, ripped photos of Anna Aumuller; underclothing whose fabric was similar to the one found on the torso; spool akin to the one that had been used to tie up the bundles of dismembered body parts; and bits of bone on the bathroom floor.

On going to St. Boniface, the detectives learned that both, the victim and a Father Hans Schmidt had worked there at the same time, until Father Schmidt had moved on. He now worked at the St. Joseph’s, where he had found a new position. Father Schmidt was thirty-two years old and German born. A small, handsome, and seemingly strong man, he had dark hair and dark eyes, and possessed a mysterious quality about him that women in his congregation seemed to like. He had arrived in the country in 1909, and one of his posts included replacing a sick pastor in the St. Francis Church in Trenton, New Jersey, where he had quickly ingratiated himself, before moving to New York City amidst rumors of missing funds. 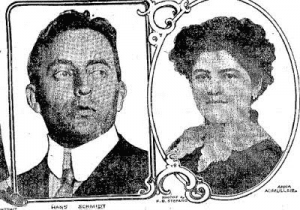 When the detectives arrived at St. Joseph’s to meet him, he was still in his clerical vestments. He denied knowing Anna Aumuller, much less having anything to do with her murder, as some of the detectives were implying; but when faced with the evidence of having rented an apartment for her, he agreed knowing her, but, in wanting to help a girl in dire straits, had wanted to keep her life private. He had a plausible story, detective acknowledged, and they had little evidence to the otherwise. They left, but promised to return soon.

Before seeing Father Schmidt again, detectives learned through their channels that while he had arrived in America and passed himself off as a priest, the reality was that he had never been ordained as one. In 1907, the Bishop of Mianz had suspended his studies in Germany when he’d discovered that Schmidt had become the chaplain in the village of Buergel, by showing fake documentation.

The next day, Inspector Faurot and his detectives returned to the Church, where they pressured him to speak to them again. Initially, Father Schmidt said that his relationship to the dead girl had been benign, but then, under further pressure, admitted murdering her, for his Patron Saint had ordered him to do so. Saint Elizabeth of Hungary, he said, had required a blood sacrifice, thus Anna Aumuller had become the victim. He had even drunk some of her blood. Inspector Faurot immediately doubted the story and suspected Father Schmidt was angling for an insanity defense.

Asked how long he’d known her, Father Schmidt said that their affair had started while both worked at St. Boniface, but carried on when he moved to St. Joseph’s. They had obtained a marriage license from City Hall, which was dated February 26, 1913, and he had officiated the ceremony himself. While it was not legal, it had placated the girl. The child was likely his, Inspector Faurot felt, and probably feared discovery of the liaison.

When describing the murder, Inspector Faurot acknowledged that it was a “butchery of a most revolting nature.” It occurred in the rear third floor apartment of Number 68 Broadhurst Avenue. He had entered unheard some minutes before midnight and, after clobbering her, he had dragged her to the bathroom, where he quickly dismembered the body in seven pieces. He was an expert with a blade, having studied surgery in Germany for some time. The pieces were then wrapped in bundles, taken to the ferry, weighed down by a few stones, and dropped in the river. Later, he returned to the apartment, where he tried to scrub away the sum of all he had done. But the stains on the mattress upon which Anna had slept would not get cleaned, thus he dragged it down to a vacant lot and tried to burn it. He asked some neighborhood boys to help him gather firewood, and together with them stared at the bonfire than ensued.

Following the confession, he was taken to the Tombs, where he ate a hearty meal and fell asleep.

Not long afterward he received a visit from a Father Evers. Evers asked him if he knew anything about the murder of Alma Kellner, a little girl whose body had been found dismembered in the basement of the St. John’s Catholic Church in Louisville, Kentucky, on December 8, 1909. Father Schmidt had been working in that city then, having just arrived from Europe and a guest of the Reverend H.B. Wessermann. Of course, Father Schmidt denied knowing the girl, much less having anything to do with her murder.

As the trial unfolded, his acting skills revealed themselves to be so good, jurors had difficulty figuring out whether or not he was truly insane. The result of that was a hung jury. But he was not so lucky the second time around. Jurors in that case returned a guilty verdict, followed by a death sentence. He was to get the electric chair. On February 18, 1916, he was executed at Sing Sing Prison, and whether fake or not, to this day Father Schmidt remains the only priest to be executed for his crimes.