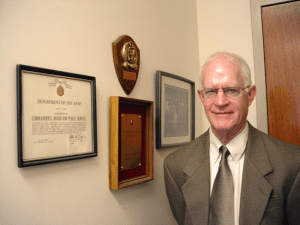 On Monday July 25, at 6:30 pm at the Sackets Harbor Battlefield State Historic Site, Don Hicket will give an evening talk on the war of 1812.

Hickey  is an award-winning scholar who has authored eleven books and hundreds of articles, mainly on the War of 1812.

Hicket, professor of history at Wayne State College in Nebraska, will talk about why the War of 1812 is so little remembered today and why it deserves better.  Wars are best judged by their consequences, and the legacy of this war was significant and lasting. It shaped the United States and Canada, and it had a profound impact on how Great Britain related to these two nations for nearly a century afterwards.

HIcket is best known for The War of 1812: A Forgotten Conflict (Bicentennial edition, 2012). For promoting public understanding of the War of 1812, he received the Samuel Eliot Morison Award from the USS Constitution Museum in 2013.

The program fee is $20 per person. Contact the Sackets Harbor Battlefield State Historic Site at (315) 646-3634 or by email at Constance.Barone@parks.ny.gov.