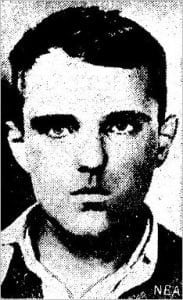 When presidential historians and scholars rate America’s greatest leaders, Franklin Delano Roosevelt is among the few who nearly always appear among the top five, along with Washington and Lincoln. While others certainly served admirably, those three achieved elevated status by facing stern tests of leadership during great crises in our history: the battle for independence, the fight to preserve the Union, and in FDR’s case, both the Great Depression and World War II.

It’s less well known that Roosevelt very nearly didn’t serve as President due to assassination attempts prior to his first inauguration. One of those stories brought ignominious headlines to the North Country over a period of several months.

Roosevelt first won the presidency in November 1932. The 20th Amendment was ratified on January 23, 1933, officially establishing January 20 as the new inauguration date for all future presidents, and making FDR the last President to be inaugurated on March 4. He very nearly didn’t survive the waiting period.

At an event on February 15 in Miami, Florida, a gunman fired five shots near FDR’s open touring car from about 25 feet away. Initial reports said that the President-elect ducked in the back seat as his car sped away, but those stories were erroneous. The bullets struck several people who were seriously injured, including Chicago Mayor Anton Cermak. FDR heard the shots and saw that Cermak appeared to be hurt. When the President’s chauffeur began driving away to protect him from harm, Roosevelt ordered the vehicle stopped so they could take Cermak to the hospital.

Said Roosevelt, “I got my hand on his pulse and found none. He was on the seat with me and I had my left arm around him. He slumped forward. A detective from Miami, standing on the running board on that side of the car, was leaning over him. He said after we had gone a couple of blocks he was afraid Cermak would not last. I too was fearful. Just then Cermak straightened up and I got his pulse. That was surprising. For three blocks I actually believe his heart had stopped. I held him all the way to the hospital, and his pulse constantly improved. It seemed like 25 miles to the hospital. I talked to him all the way.” In the days to follow, FDR visited the victims before moving on to other commitments. (It appeared Cermak would survive, but he succumbed 19 days after the shooting.)

The assailant was Giuseppe Zangara, who later said, “I meant to kill Roosevelt and I’m sorry I didn’t,” adding that he once planned on killing the king of Italy, and had recently begun targeting President Hoover before learning of Roosevelt’s impending visit to Miami.

A week after the shooting, a package addressed to “Franklin D. Roosevelt, Washington, D. C.,” fell from a mail sack in the Washington post office and opened, revealing a .12-gauge shotgun shell fashioned into a crude bomb. Postal officials estimated that it had about one chance in ten of detonating, but with an exception: it would almost certainly have exploded “if dropped perpendicularly,” said Chief Inspector William Satterfield. “I am inclined to believe it was the work of a crank, but if it had gone off, it might have resulted fatally.” Potentially lethal or not, what really mattered was that someone had sent an explosive device to the President-elect.

Large, bold newspaper headlines in every state in the country reported the story, which by the second paragraph of each article noted that the device had been shipped from Watertown, New York. Upon learning the terrible news, Watertown Mayor John Harris telegrammed Roosevelt: “The people of Watertown, N. Y., are greatly shocked, and they deeply deplore the dastardly bomb incident originating in this city, where you have such an abundance of supporters and as many admirers. Everything possible is being done to bring the culprit to justice.”

Department of Justice officials, postal inspectors, and secret service agents rushed to the North Country and began investigating. A substitute carrier recalled collecting the package from atop a mailbox not far from the post office, and that it was addressed to Roosevelt. Handwriting experts analyzing a note that accompanied the package suggested it was the work of young boys. But after a week, with no progress made, most of the federal men had returned to Washington.

In early March, new clues sent investigators back to Watertown. It was then publicly revealed that two days before the bomb was mailed, a threatening note in the same handwriting was received by the Watertown police department: “Chief Singleton: I am friend of Zangara and I want to take up work that he fail to do. I kill all presidents, governors, and millionaires. I am Calabrian same as Zam. I hate policemen and kill all your officers who I see on streets at midnight. I am one who killed Kansas City millionaire so I kill police. [Signed] Paul Altroni of Italy.”

The notes were clearly related to comments made by FDR assailant Giuseppe Zangara, who said: “I wanna kill President, all capitalist crooks. If I had machine gun in my hands, I kill all presidents, all kings. I kill all kings, presidents, and burn money in fire. No my fault—fault capitalists.”

While the investigation continued, postal workers in Watertown encountered a second bomb addressed to Roosevelt in Washington. An attached note with matching handwriting was again included, but local and government officials refused to acknowledge receipt of the second bomb, wishing to continue investigating quietly.

In mid-March, leaders of the probe said news was imminent, but on the 29th, a third shotgun-shell bomb was found on a mailbox near the Watertown post office. It was addressed to a man linked to an airline in New Jersey (the address proved fictitious), but inside was a note requesting that the package be forwarded to President-elect Roosevelt. The handwriting matched that of the first two notes.

In mid-June, watchful postal employees found another missive for Roosevelt and turned it over to Police Detective Edward Curtin. The letter read: “President sir just a few answer. I have a cousin of mine in England and I wrote to him he wrote back and told he’ll try anything to hold up Chamberlain to get bonds to government thru a secret mail. Respectively yours, First Sergt. Byrne.” The return address said, “Sergeant James Byrne, Company C. F. A., Madison Barracks.” Also included was a large check for the payment of war debts. Needless to say, lawmen considered the notes bizarre in content.

Both the letter and check were folded within a Seaboard Alliance railroad folder, which was torn across the long edge. After determining that a rack of identical folders was on display at the Jefferson County National Bank, Detective Curtin asked officials there to monitor the display area for any suspicious persons. Several days later, employees spotted just what Curtin was looking for and detained a young man by the name of Joseph Doldo.

After first denying any involvement, he admitted to sending all the letters and bombs, and to using railroad folders—which he had torn on the long side, just like the sample held by Curtin. Doldo also confirmed sending Roosevelt an additional package containing a bottle marked as nitroglycerine, but which actually held only soap, flour, and water. The accompanying note suggested it was medicine for Roosevelt’s cold. The package had been discovered at the Watertown post office and held with other accumulated evidence. He added that Paul Altroni, the name signed on the first note to Watertown police, was a friend of Zangara’s, and that all the notes and makeshift bombs were nothing more than a joke.

Doldo, a 21-year-old Watertown native, had attended school until the fourth grade, but left because of difficulties. He had no job and lived with his aunt and uncle in Watertown. According to them, he was very patriotic, listened religiously to Roosevelt on the radio, and often expressed his love for the President. They described him as good with children, regularly babysitting in their home.

But prosecutors felt he was mentally deficient, or perhaps mentally ill, which Federal Judge Frederick Bryant considered before setting bail at $10,000 (equal to $185,000 in 2016). Of particular concern were two more of Doldo’s notes sent in a package to Blair Laboratories in Virginia: “Sir, will you deliver this to the President I give you $500 if you will Please will I warn you.” The second note said, “Hon. President Franklin D. Roosevelt I am coming to Washington to visit you and this is the first time I’m going to be there. I am mad. Your going to be murdered by this hand. I will be there. Hand of Misery.”

He was indicted on two charges — mailing explosives and sending threatening letters—and in mid-July, after hearing all the particulars, Judge Bryant sentenced Doldo to 16 years “in an institute designated by the attorney general.” This allowed for an assessment of his mental status, which would send him either to prison as punishment, or to a prison hospital where he could receive treatment.

Because he displayed erratic behavior and mental instability, Doldo was assigned to the United States Medical Center for Federal Prisoners (MCFP), a facility that opened in Springfield, Missouri that same year (1933). The MCFP became infamous, as did many prison “hospitals,” for various reasons. Among the high-profile inmates who did time there were Robert Stroud (the Birdman of Alcatraz), Joseph Bonanno of the New York City crime family, Larry Flynt of Hustler magazine, and “the Teflon Don,” John Gotti.

Doldo later returned to Watertown, where he passed away in April 2003 at the age of 91. His actions as a 21-year-old are a stark reminder of the potential for an individual to alter the course of history. Imagine if John Wilkes Booth or Lee Harvey Oswald had missed their target. Had Leon Czolgosz misfired and McKinley continued as President, how would then-vice president Theodore Roosevelt’s life have played out? On a minor scale, we wouldn’t have the Roosevelt-Marcy Trail, and the home page of the North Creek Depot Museum would surely look different.

The domino effect of such events is deep and lasting. Had Zangara or Doldo been successful, the historical repercussions for America would have been far-reaching: perhaps no CCC (which deeply impacted the Adirondacks), no New Deal, no Social Security program, a different role for the US in World War II, and no 22nd Amendment (which was ratified in 1951, limiting a president to being elected twice—in the wake of FDR being elected four times). The speculative list goes on and on—one of many reasons history remains so fascinating.