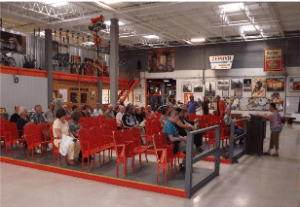 At first glance, the inside of the Motorcyclepedia Museum in Newburgh, Orange County resembles a large warehouse of movie poster memorabilia as faces of Steve McQueen, James Garner, Peter Fonda and Elvis line the immense walls. There’s even a poster of  – can it be? – of Barbara Streisand astride a motorcycle from the movie, “For Pete’s Sake.”

Visitors to the museum on Lake Street need not be aficionados of the motorcycle per se, since owner Ted Doering has created a clever way to use the bike as a vehicle (pun intended) to illustrate the American way of life, how we used to get around, and what entertained us over the past century. But, if you happen to be a lover of the bike, then you’re in for one sweet treat.

I joined the Cornwall Historical Society on a recent evening tour, and thanks to the enthusiastic volunteer guides, we were thoroughly engaged by the stories that accompanied each and every bike. 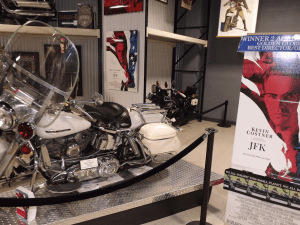 Doering inherited his love for the motorcycle from his father, and between the two, they purchased the former lumber warehouse to display their over 400 bikes for the world to enjoy. But they didn’t stop there. High on the walls or hanging beside the bikes are signs of the times, advertisements from the old days, covers of comics that depict motorcycles, pictures of movie stars, album covers, books, and all sorts of motorcycle-themed items. Motorcyclepedia Museum, considered the Smithsonian of motorcycles, is an experience that fires on all cylinders.

Among the stories we heard, some raise goose bumps more than others, like the bikes that witnessed history: the 1964 Harley Davidson that rode in President Kennedy’s motorcade* on November 22, 1963 and later featured in the Kevin Costner movie, JFK. Or the bike that Charles Lindbergh traded in for his plane, the Jenny.

Of course there are samples of law enforcement bikes from the NYPD and the City of Newburgh, and icons from the ’60s: the replica of Peter Fonda’s legendary bike from Easy Rider, and the beat up one James Garner rode in the TV show Nichols. There are the bikes with so much bling, they dazzle; others so chopped up and put back together, one is amazed they don’t just fall apart. 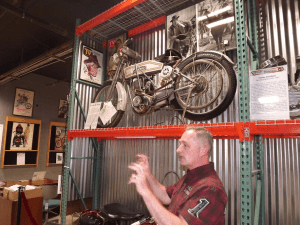 Wandering the two large floors, we see that the bikes are divided up by era, by legendary motorcycle designers, or collected by a shared design. We learn that motorbike designers changed up their bikes and accessories to keep current, like when the sidecar was added as an answer to the automobile so it could, too, carry more than one rider, or the leather caps and scarves riders would wear to compete with the look of glamorous pilots.

Gottlieb Daimler, the well-known high-end car manufacturer was actually behind the creation of the first motorcycle or the riding wagon (reitwagen). We can view “an outstanding full size replica,” built in his backyard in Germany, before he partnered with Carl Benz to form the legendary Mercedes Benz. But credit goes to Steve McQueen who gave the motorcycle its sexy boost. A few of his beloved bikes are on display, collected by Doering at various auctions after McQueen’s death. 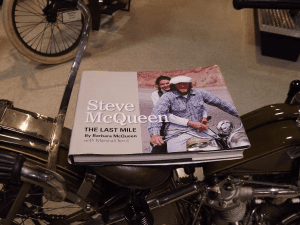 It seems fitting that the museum, opened in 2011, is in Orange County since as the minute the snow melts, the bikes come out, hitting the scenic Hudson Valley roads that riders love so much.

*Bill Miller, an investigator of the Kennedy assassination and Warren Commission verified this as one of the motorcycles. This motorcycle took the first call on the sniper shooting.

The Motorcyclepedia Museum, located at 250 Lake Street, Newburgh, is open Friday, Saturday, and Sunday: 10 am – 5 pm.