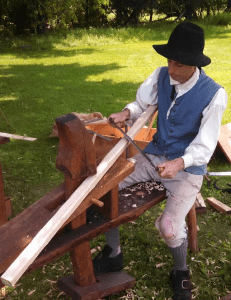 The Saratoga National Historical Park (Saratoga Battlefield) will show Revolutionary War army trades at work, on Saturday and Sunday, July 16 and 17, from 10 am to 4 pm.

Armies had a lot more to do than fight in the Revolutionary War. They employed and contracted with a variety of professional tradesmen and women who worked to provide and repair supplies needed by the troops. Blacksmiths made and repaired ironwork; Tailors sewed and fixed clothing; Woodworkers built and fixed wheels and artillery carriages; Tinsmiths made artillery cartridge casings; and Cordwainers made shoes for the troops.

See how common items were manufactured by hand in 1770’s Revolutionary America, well before the age of industrialization. There is no cost to attend this event, but park entrance fees apply.

For more information on this or other programs at Saratoga National Historical Park, call the visitor center at (518) 670-2985, or visit the park website.

The Saratoga National Historical Park is located between Routes 4 and 32 in Stillwater.