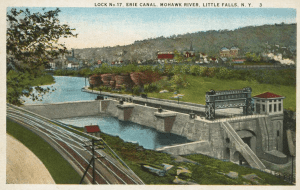 The Little Falls Journal and Courier proclaimed in a banner headline on their July 4th, 1916 edition that the celebration for the completion of Lock 17 “will go down in history.”

The paper stated that the pageantry and parades of the previous Friday and Saturday were a tremendous success. “Nothing so elaborate, so gorgeous, so successful from an historic, an artistic and idealistic point of view was ever before undertaken in this city… The crowd on Friday was conservatively estimated at four thousand and on Saturday it was as large or larger.”

Featured throughout the festivities were the recently arrived immigrant communities, the “New Americans” that Governor Whitman especially recognized in his remarks that Friday.

The community of Little Falls and the State of New York had every reason to be proud of the opening of the new lift lock which remains one of the great engineering achievements of the Barge Canal system to this day. Lifting boats over forty feet, the highest elevation in the world at the time, the lock did what it had taken four locks to do on the Enlarged Erie Canal. It was as significant an achievement in the Barge Canal era as was construction of the Little Falls Canal of the Western Inland Lock Navigation Company over a century earlier. The site is one of the most recognized in Erie Canal iconography, just east of the famous Profile Rock of Moss Island, along the routes of the original Clinton’s Ditch Erie Canal and the Enlarged Erie Canal.

Work began in September 1908, just five years after the State’s voters had approved the construction of this third Erie Canal. Complicating the lock’s construction was the maintenance of navigation on the existing Erie throughout the duration of the work. The lock was probably completed by 1912 but could not be used until sections of the new Barge Canal were completed to the east and west. For several years, a temporary towpath was built along the south edge of the lock to allow use of the old canal. The excavation of the rock foundations was particularly challenging. Indeed, one of the primary contractors was fatally injured in September 1909 when a skip of excavated stone broke loose.

Most challenging were the new technologies. Unlike the traditional mitre gates, a “guillotine” gate is used at the lower end. The gate is counter-balanced and drops down to close the chamber’s eastern end. The design was felt to be stronger and better able to resist the water pressure of the enormous chamber which when filled holds more than 6 million gallons of water. 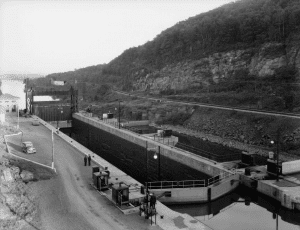 Another unique characteristic of the lock was the side-pool on the south edge of the chamber. Canal planners were concerned that a lock this massive might drain water supplies to the west. The side-pool operated by capturing the upper half of the chamber’s water as it was emptied. The captured water in the basin would then be returned when the lock was filled. A similar technology has been recently noted in the new locks of the Panama Canal. This latter feature was eliminated in the 1950s as was the distinctive arch at the eastern end so as to accommodate a deeper channel and higher clearance.

The participants to the opening ceremonies of June 30th, 1916 knew that they had in their backyard one of the nation’s engineering marvels, even more noteworthy in light of the Panama Canal construction going on at the same time. Governor Charles Whitman, State Engineer and Surveyor Frank Williams and many other state officials arrived by train that Friday afternoon. The Governor addressed the crowd with a history of the Erie Canal. He compared the new lock with the remains of the nearby 1790s lock of the Little Falls Canal, proclaiming that both showed “fearless determination and larger vision” as the State charted economic growth and prosperity. He stated that “what is needed today is a vast popular awakening, a realization that government is no automatic device but a tremendous enterprise, and its wise direction is dependent upon the intelligence and interest of every individual.”

The dignitaries were presented with a historical pageant that recounted the history of Little Falls. It concluded with a display entitled the “Prosperity Period” that highlighted the contributions of the city’s various ethnic communities. This last element was especially appreciated by the Governor as he praised the “New Americans.” In this final display each immigrant community made presentations. First came “a large company of Polish residents of this city… all dressed in their picturesque native costumes and gave a beautiful exhibition that called forth frequent and hearty applause.” The Italians followed, with the singing of Italian songs and “all were dressed in native costume.” “Following this came a Slovac wedding party and again the native costume added a picturesque and pleasing feature. This party also had its own music and delighted the large audience with the enactment of one of the interesting ceremonies of their native lands.”

Saturday’s celebrations included a massive parade that similarly recognized the new immigrant communities, each in its own bands and societies. This time the Italians led off this portion of the festivities followed by the “Slavonic Band”, then the Poles and the Russians.

The new Barge Canal was completed less than two years later, opening in its entirety in May 1918. On that day the “modern” shipping canal, connecting Buffalo and the Great Lakes to the Hudson River and New York Harbor was completed.