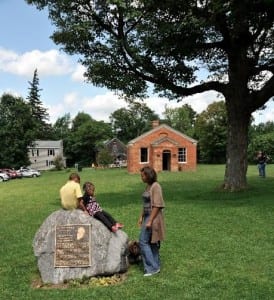 The event opens at 10 am with free parking and free registration at the Estate, followed by programs similar to those conducted in the 1920s and 1930s by a generation celebrating the emancipation of the generation before them. In 1925, more than 600 black men and women from Central New York made a pilgrimage to Peterboro, home of Gerrit Smith, to pay homage to abolitionists who fought for their freedom. Emancipation Day celebrations grew in later years, drawing crowds of more than 1,000 people, who came from Syracuse, Utica, Ithaca, Binghamton, Oswego and Fulton for parades, picnics and concerts. Although the practice faded after World War II, local descendants of freedom seekers are holding the Peterboro Emancipation Day celebration for the 7th year since its revival in 2010. 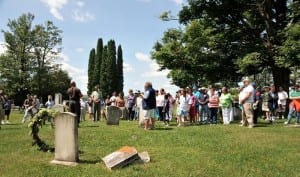 At 10:30 am Co-Chairs of Emancipation Day, Jim Corpin, Carrie Martin, and Max Smith will welcome guests to the event and to the Gerrit Smith Estate National Historic Landmark. Corpin is a member of the Smithfield Community Association, the governing board of the GSENHL and a member of the Town of Smithfield board. Max Smith is a former mayor of Oneida and a passionate speaker about his roots in Peterboro. Martin is Co-Chair of the GSENHL, Secretary of the Smithfield Community Association, and the organizer of the Peterboro Civil War Living History Day. After assembly, announcements, and song a group event photo is followed by the Processional to the Peterboro Cemetery. Two wreaths are carried to the grave sites: one is laid on the grave of a man or woman that reads Born a Slave; Died a Free Man or Born a Slave; Died a Free Woman, and the other on the humble grave of wealthy abolitionist Gerrit Smith.

After a bring-your-own-picnic, or lunch at the Deli on the Green, a special program to celebrate the Centennial of the National Park Service (NPS) will open at 2 pm with thirteen rings of the Peterboro tower bells calling people to The Barn which was a transportation hub of Underground Railroad activity at the site. The Gerrit Smith Estate is a part of the NPS as a National Historic Landmark and as a site on the Network to Freedom (NTF), the national Underground Railroad Trail. The Estate is one of 75 sites in the nation, and one of seven sites in the state, to receive the NPS Network to Freedom Passport Stamp. After brief programs by scholars, proclamations by dignitaries, and the presentation of the passport stamp, the stamp will be ready to mark the NPS Centennial Passports available at the Peterboro Mercantile.

Tours of the Gerrit Smith Estate National Historic Landmark will be conducted at 3 pm. At 4 pm refreshments will be served at the Smithfield Community Center, the building where the abolitionists of the state held the inaugural meeting of the New York State Antislavery Society in 1835. The National Abolition Hall of Fame and Museum will be open to visitors to see a facsimile of the Preliminary Emancipation Proclamation, once owned by Gerrit Smith.

At 2 pm on Sunday, August 7, a Community Conversation for all interested persons will be held in The Barn. Drea Finley will be the lead facilitator of the We’ve Always Been Here: LGBTQ Identities, Race and the Power of Community. Finley is a member of the Cabinet of Freedom for the National Abolition Hall of Fame and Museum and is co-chair of its Cultural Diversity Committee. In her working life, Finley serves as an Assistant Dean for Administrative Advising and Director of First Generation Programs at Colgate University. Finley is also a Masters student at Syracuse University in the Higher Education Cultural Foundations Program. As an activist; she writes and speaks often on race and racism and their intersections with other identities and systems of oppression.