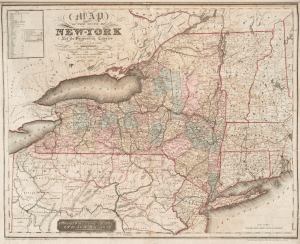 New York’s history community is arguably the most diverse, energetic, and imaginative of any state’s. There is always more exciting work to be done to strengthen our programs, raise the visibility of state and local history, and help coordinate our work.

Here are five opportunities for consideration and action.

This show, which has just completed its third season, is mostly a New York story. But it is filmed entirely in Virginia.

Thomas Jefferson’s boyhood home, Tuckahoe, is a stand-in for the Long Island mansion of Judge Richard Woodhull, the hero’s father. Streets in Richmond and other Virginia towns, given an 18th century makeover by the show’s technicians, represent New York City and other New York communities. Long Island Sound is created digitally.

The Virginia tourism office is running ads during the show. Visitors to Virginia are invited to travel along the “TURN Spy Trail” — the filming sites in Virginia, not the sites where the history actually unfolded. The Virginia tourism office ads use the tagline “It’s Your TURN to Make History.” It’s part of Virginia’s robust campaign to draw visitors to its Revolutionary war sites and tout its central role in the war.

The show has no New York ads or references.

In recent episode, Virginia governor Terry McAuliffe made a cameo appearance dressed in 18th century military garb as Virginia general Richard Lawson, visiting General George Washington’s camp. Challenged by reporters about why he devoted time to this, the governor responded that he was on set mainly to lobby the show’s producers to return to Virginia to film the show’s fourth season. The film industry contributes more than $25 million a year to the state’s economy, he added.

In the next to last episode in June, British major John Andre is captured by New York military scouts (played, of course, by Virginians). In his boot he carried plans and documents about the fortifications at West Point, furnished by Benedict Arnold as part of his plan to betray the patriot cause and turn the fort over to the British. Those documents themselves are actually in the New York State Archives.

Season 4 of TURN is in the works. It would be another great opportunity to turn public attention to New York history, in this case the Revolution, e.g., through sponsorship and ads by the Path-Through-History program about New York Revolutionary war sites.

Also on the July 12 New York Times bestseller list are Ron Chernow’s Alexander Hamilton and Lin-Manuel Miranda and Jeremy McCarter’s Hamilton: The Revolution. They are there because of the smash Broadway musical “Hamilton,” winner of a Pulitzer Prize and 14 Tony awards. Manuel wrote the play and plays Hamilton in it; his book is about how it came together, and also includes the libretto, i.e., the actual words the cast sings. He based much of the play on Chernow’s book.

So, Hamilton is much in vogue these days. We ought to make more of the fact that Hamilton, a towering national figure, was also a New Yorker.

Most of his work was done in New York City. He married Elizabeth Schuyler, daughter of New York revolutionary leader and Albany land magnate Philip Schuyler. He was a New York delegate to the Continental Congress and the Constitutional Convention. He wrote his Federalist papers in New York. George Washington was inaugurated at Federal Hall in New York City, then the nation’s capital, and Hamilton began his work as first Secretary of the Treasury there. Later, he practiced law there. He was one of the original Regents.

At one point early in the play, the cast sings (the words are in the libretto, in Hamilton: The Revolution):

Look around, look around
The Revolution’s happening in New York!
History is happening in Manhattan and we just happen to be
in the greatest city in the world!

Hamilton came to New York as an orphan, without resources or connections, just brimming full of talent. His success in a sense is an against-the- odds New York. story. At his wedding to Elizabeth Schuyler, the cast sings:

In New York, you can be a new man!

This is a chance to capitalize on Hamilton’s role in New York history.

*When New Yorkers run for President

Two New Yorkers will be contending for the presidency this year. Actually, New Yorkers are often on one of the two major political parties’ tickets, for president or vice president, and this will be the third time since 1900 that two New Yorkers have opposed each other (Alton Parker vs. Theodore Roosevelt, 1904; Tomas Dewey vs. Franklin Roosevelt, 1944). This would be a good opportunity to call attention to New York’s transcending importance in American political history.

New York State does not celebrate its own birthday, April 22, 1777, the day the first State Constitution was finished and promulgated. We ought to do that every year, starting next year, April 22, 2017, the state’s 240th birthday. There will be a good deal of public interest in constitutional matters because, in November, voters will have a chance to decide on whether to hold another constitutional convention. There are expected to be sessions on constitutional history at this fall’s New York history conference and there is a forthcoming special issue of the State Bar Association’s Government, Law and Policy Journal on constitutional history.

But much more could be done to get the word out to the general public. This is an exciting story of rebels-on- the run, drafting the Constitution in such haste that it was voted on with crossed-out words and interlinear corrections because there wasn’t enough time to make a clean copy. The convention approved it, promulgated it, and New York State came rather suddenly into existence! The original Constitution (with the cross-out’s and corrections) is in the State Archives.

Things that might be done next year, with some planning that needs to start now, might be: public discussions of the constitution at key sites, such as New York City, Kingston (where it was written), and Albany; how the delegates wrote a document with such staying power (it was not changed until the next constitutional convention, 1821, and then the changes were relatively minor); or how they addressed (or avoided) key issues such as civil rights and slavery. The document might go on public exhibit for a few days, with appropriate security safeguards.

It would be a great time to develop curriculum content or a document packet on the constitution for use in the schools. The Grade 7-8 Social Studies Framework, which covers U.S. and New York history, includes the U.S. Constitution but not New York’s.

New York’s history is endlessly rich, fascinating, and its story always needs more telling. Leadership, coordination, and staying in touch and working together, are all essential. Two opportunities are particularly important right now.

Michael Watkins, in his classic book on advice for new leaders, The First 90 Days, says that “the actions you take during your first three months in a new job will largely determine whether you succeed or fail.” New York’s new State Historian, Devin Lander, is off to a running start. His July 12 post, after finishing only his first month on the job, announced plans to form a New York State History Advisory Group and a New York History Crossroads Website, both very positive initiatives. He noted that the excitement around the history community coming together shows “both the passion members of the community have for the important work they are doing and the need for a concise and attainable priority agenda.”

Devin Lander will need the support, advice, and counsel of the state’s history community as he continues to develop his leadership role.

Another thing we need to do right now is to contribute to the support of this New York History Blog. This is the only forum in the state for keeping up with what’s going on in the history community, state programs, issues, and occasionally, controversies.

Without it, just knowing what is going on in our state’s historical enterprise would be next to impossible. John Warren’s leadership and dedication keep it going, including finding and disseminating news events about history programs throughout the state that would otherwise be known only in their home communities. His reporting and coverage are superb.

But the Blog is about New York history, which means all of us. It needs and deserves our support.