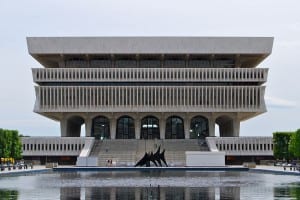 New York State now has a new historian. In some ways that should seem like a routine announcement since the State is required to fill that position. However as people in the history community well know, the State, like many counties, cities, towns, and villages does not always comply with regulatory requirements. There is no penalty to the State for the failure to comply either and only a trivial unenforced one at the municipal level.

Even when the State and the municipalities do comply with the letter of the law, they don’t necessarily comply with the spirit. The position is often disrespected and/or disregarded excluding some ceremonial occasions and is not taken seriously when the real decisions of government are involved. The diminishment of the State position sets a poor but accurate example to the county executives, mayors, and town supervisors that local and state history really aren’t important regardless of any lip service at the press release level. How often is the voice of the history community actually heard in the REDC funding process (which is now beginning again for the 2016 cycle). How much funding is there for collaboration in the Path through History project regardless of how often the jargon is spoken? Message received.

With these thoughts in mind, let’s consider the latest chapter in the story of the New York State Historian: the Bob Weible years. Just to put things in perspective, here are some excerpts from the press release by the NYS Museum on February 4, 2008, announcing Bob as the new state historian. According to a press release issued by the New York State Education Department:

“Weible was selected following an exhaustive search that began in 2006 as soon as funds became available for the position. Following the budget crisis of the 90’s the Museum has faced an uphill battle to obtain the funds necessary to rebuild capacity as several key positions were vacated due to retirement and other budgetary factors.”

Seemingly, the heroic State Museum persevered against all odds and finally prevailed despite the adversity.  However, former State Historian Bob Weible paints a different picture in his piece in The New York History Blog, “Former NYS Historian Weible On State Ed Bureaucracy, Responsibilities“:

“State Historians subsequently fought through various internal reorganizations to meet external as well as internal demands, but the position lost support and became vacant in 2001. And it remained so until 2008, when pressure from county and municipal historians persuaded the State Education Department to fill the vacancy.”


Note the different in emphases in the two versions: budgetary concerns versus a degradation of the position until the grassroots history community forced a changed. The State Museum versus the State Education Department. What really happened? Here is an interesting historical challenge for historians of public history in New York to investigate.

A native New Yorker and nationally recognized historian, who has held various leadership positions on the state and national level for the past 28 years, has been appointed the new chief historian.

Siegfried specifically cited him “for the renewal of the Museum galleries and the transfer of our extensive history collection to a new storage facility” which gives a pretty good indication that his real work would be with the new exhibits in the Museum.

The press release went to state that the Weible would “also will work with local historians and academic and cultural institutions to increase the public’s understanding of New York State history and its role in U.S. history.”  In English, this meant about 25% of his time.

The tricky part was in the second “also”: “He will also oversee management of the Museum’s history collections and help develop content for public programs and teacher workshops.”

Public programs and teacher workshops?? I know I initiated a couple of them in the New York State Museum with Bob, but I would say overall this is an area that needs serious work.

Here is how Bob described the situation in his February 22, 2016 piece here at The New York History Blog:

“But the decision to combine two very different positions into one was really a kind of bureaucratic sleight-of-hand: the State Historian position may have been officially filled, but as was made clear to me, the Museum’s institutional priority had remained the same: research and collections care.”

Bob generously acknowledged the budgetary constraints on the state government in general and added his own perspective:

“But it is true that without proper leadership and public support, bureaucrats can easily lose sight of the larger social goals their organizations were created to achieve and become nihilistic, self-serving careerists dedicated simply to perpetuating their positions and authority.”

By referencing proper leadership and public support, Bob addresses the two sides of the dynamic: leadership from the top, meaning Governor Andrew Cuomo, and advocates from the grassroots, meaning the history community. While it’s easy to fault our Governor for his lack of support beyond signs and fixing roofs, it is also true that the history community doesn’t ask for anything beyond signs for its own site and fixing the roof of its own site. The requests of the history community tend to be small and local, lacking in statewide vision and ignore the necessity of civics for the health of the social fabric.

During his tenure as State Historian, Bob Weible had the opportunity to discuss some of these issues.

On March 17, 2014, in Saratoga Springs at the annual meeting of the Association of Public Historians of New York State (APHNYS) in his State of the State’s History address, Bob called for the need to cooperate. He challenged the attendees with the declaration that if we can learn to work cooperatively with each other we can find out how powerful we are. He said that history is what unites us as Americans, as New Yorkers, as members of our local community. He equated a community that forgets its past with a person with Alzheimer’s. A community’s memory is important for identity, for pride of place, for a strong sense of place. Advertising is not enough for quality heritage tourism. Civics needs to be taught in our schools. With these thoughts, the State Historian had raised important issues about:

But like the proverbial tree falling in woods, Bob’s words in Saratoga Springs were not heard in Albany.

A year later, he returned to some of these issues in his State of the State’s History address on April 10, 2015, at the APHNYS conference in Corning. He spoke about the history markers, a favorite topic of his, about the lack of a state database of history markers, about how they promote tourism and the way people think about their own community. He spoke of the under-utilization of heritage resources and the lackluster historical presentations on behalf of heritage tourism. He called for innovative and engaging history storytelling that would reinforce community identity and attract visitors seeking an authentic experience. But once again he was the proverbial tree falling in the woods that no one hears fall. Bob’s words in Corning were not heard in Albany.

On March 30, 2016, Bob tried to make sure he would be heard in Albany. In an article published in the Albany Times Union entitled New York State’s Former Chief Historian Warns the Bureaucracy Is Putting History at Risk included the observation that “The state once led the nation in creating and supporting institutions that ensured the survival and use of historic documents, artifacts, buildings and sites.” Times changed and now “New York has also witnessed the dismantling of a unique network of historians that had long enabled both classroom and lifelong learners to become informed, more active citizens.”

He repeated the charge he levied in The New York History Blog on how the grassroots push was the driving force behind the State finally complying with Stare regulations and filling the position of state historian. Then with the exquisite subtlety of a maestro at work, he gently said:

“The bottom line here is that, without proper leadership, New York’s entire history community has for decades been compromised in its ability to live up to its public service responsibilities.”

Can the situation be reversed?

Bob even provided a solution to the problem:

“In 2011, the Board of Regents approved a plan to investigate the possibility of reinventing the Office of State History. Unfortunately, internal opposition has kept that from happening. And after my recent retirement, the museum even announced plans to downgrade — and further undermine — the state historian position. Not surprisingly, this idea has raised serious questions within the state’s history community.”

Bob is more optimistic than I am.

While I would prefer to be optimistic, I have zero confidence that the State on its own initiative will do the right thing after decades of dismal neglect. Nothing in the REDC process, or the Path through History project, as they have operated so far, suggests any serious interest in nurturing, developing, and promoting state and local history for the health of the social fabric or the growth of the economy.

I also have grave doubts over whether the history community itself can make its voice heard and advocate in Albany.