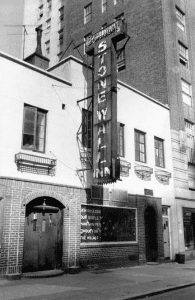 President Obama designated Christopher Park in Greenwich Village as Stonewall National Monument using his authority under the Antiquities Act. The monument’s boundary also encompasses the Stonewall Inn, a seminal location in Lesbian, Gay, Bisexual and Transgender (LGBT) history, as well as the surrounding streets and sidewalks integral to the Stonewall Uprising.

In June of 1969, after a police raid on the Stonewall Inn that targeted the bar’s LGBT patrons, a clash occurred that is now understood to have launched the modern LGBT civil rights movement. Each June, during LGBT Pride Month, these historic events are remembered nationwide with Pride festivals, parades and other celebratory, historical and educational activities. The Stonewall Inn site was designated a National Historic Landmark and a National Park Service affiliated area in 2000.

Photo: The Stonewall Inn, taken September 1969. The sign in the window reads: “We homosexuals plead with our people to please help maintain peaceful and quiet conduct on the streets of the Village—Mattachine”. The Mattachine Society was one of the earliest gay rights organizations in the United States. Photo by Diana Davies / New York Public Library.