During the summer hiking season, one of the most popular destinations in the Catskills is Overlook Mountain. Sunny days will have the parking area, located across from a monastery on Mead Mountain Road in Woodstock, at overflow capacity. The hike to the summit, along a dirt road, is not especially grueling, though hikers can expect to do some heavy breathing as they near the top.

Hikers who reach the summit are rewarded with a vista of nearby mountains and a glimpse of the Hudson River. A firetower provides extra elevation, and enhanced views. Hikers will also notice antennae, serving various past and present communications functions. The hiking experience today would be much, much different had an ambitious and forward-looking plan to establish an educational television station on the mountaintop come to fruition. Had it happened, those hoofing it up the mountain (were they even allowed to) would notice a certain amount of vehicle traffic, transporting technicians, on-air staff, and educators to the mountaintop.

Most memorable to those who have made the Overlook climb is the shell that was once the elegant Overlook Mountain House. The structure was actually the third iteration of the hotel to grace the summit. The first, which opened for the summer season in 1871, burned down just a few years later (but not before hosting Presidents Ulysses S. Grant and Chester Arthur). The second, built not long after the destruction of the first, was in service for years, until it also burned to the ground in 1923. The ruins that now greet hikers are of the next attempt–in the 1920s and 1930s–to construct a lasting structure. This third hotel, according to a 1969 article in the Kingston Freeman, was “elegant, luxurious, carpeted and…completely furnished,” but it never opened to the public.

The hotel sat there while its ownership was challenged in the courts. In 1941, proceedings that the Kingston Freeman said “had been pending for some time” were held relating to an action instigated by New York attorney Irving Schneider on behalf of a step-son of Morris Newgold (the builder of the hotel). It challenged the right of Morris’s son, Harry Newgold, to dispose of materials from the hotel. The claim of the step-son, Gabriel Newgold, control of the property. 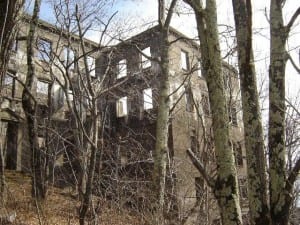 The hotel sat there when, in August 1945, 13-year- old Charles Hyatt was killed in an accidental shooting as he and a companion explored the abandoned building. (It was ironic that, three years earlier, teenager Jack Ross, who was accidentally shot while boating on nearby Echo Lake – by the same rifle that did in Hyatt – had been taken to the hotel where a truck carried him down the mountain to a local hospital where his wounds were treated.)

The hotel sat there when it was looted. In 1946, a truckload of lumber was removed. Then, in 1948, pipes, gauges and fittings were illegally taken. A State Police investigation indicated that Edward Ocker, Jr. had stolen these materials and sold them. Gabriel and Wilbert Newgold positively identified the recovered items as having come from the hotel.

The Newgolds, perhaps a bit tired of the problems that resulted from the hotel sitting abandoned in a remote location, began looking into new uses for the property. In 1946 it was reported that RCA was interested in establishing a facility on the summit. The company planned to install a super transmitter, with the capability for long wave, short wave and television broadcasting, in order to provide service to upstate New York, Connecticut and Massachusetts. While building the facility, workers would live in the old hotel. But, the planned broadcasting facility seems to have never been constructed. 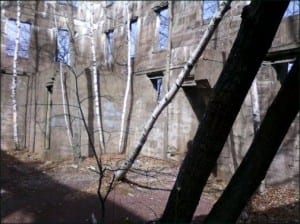 Fresh activity came to the mountain in 1950, when the New York State Conservation Department constructed a 70-foot steel firetower within yards of the abandoned hostelry. To facilitate access to the summit (which the Newgolds leased to the state for $1 a year), the old carriage road was bulldozed and resurfaced. A cabin was thrown together to house the fire observers. (It was reported that while the tower was being assembled, workers killed 15 rattlesnakes–this writer can confirm from personal experience that hikers should well heed the warnings about rattlesnakes on the mountain.)

In 1953, Wilbert Newgold floated a new idea. Newgold, a radio announcer and producer who had hosted programs on WOR in New York City in the 1920s, offered the mountaintop to the state for use as an educational television center. The Federal Communications Commission had, in 1949, allocated UHF frequencies for educational broadcasting (although few television sets at the time could receive UHF signals). A commission created by Gov. Thomas E. Dewey looked into how educational television broadcasting could be implemented by the Board of Regents. It was proposed that ten stations be established around the state.

Newgold firmly pointed out the numerous advantages offered by a station at the top of Overlook. With a direct line-of- sight to both New York City and Albany, a station on Overlook could reach communities in a 10,000 square mile area. This conclusion was reached by television engineers who had already studied the location (presumably in connection with the earlier RCA project idea). Buildings that were on-site could be adapted for the proposed television center. The old hotel could be made into production studios, and the old power house, which had once housed dynamos to provide power to the hotel, could again be used as a powerplant for the transmitting equipment. The craftsmen and artists who lived in Woodstock, at the base of the mountain, could be the source of inspiration for “visual education.” And the recent improvements to the access road would allow easy travel to the facility, where there was also room to build landing facilities for aircraft. Newgold was willing to offer use of the location to the state for free, anticipating that commercial entities could be charged a fee for their use of it.

The proposal for setting up all ten stations was estimated to cost close to $4 million dollars, with an annual operational expenditure of over $2 million. Though the price tag was high, opposition to the plan focused on non-monetary aspects. The Supervisors Association urged the Legislature to reject the proposed system, saying that it would afford the state government a “medium of propaganda.” Such facilities should instead be operated by private companies. But Buell Gallagher, President of the College of the City of New York, disagreed, believing that educational channels would be not be influenced by partisan politics, and called the idea that management by the state would lead to thought control a “hallucination.”

There was also the problem of creating the educational content for the stations, since it was estimated that educators in the state would not be able to supply enough programming to make the system sustainable. It was noted that, though commercial broadcasters already made some airtime available to educators, staffing constraints prevented them from fully taking advantage of it. There was also the reality that the stations would employ UHF broadcasting, and at the time, most television sets could not receive the signals without adaptive equipment.

In the end, the commission voted down the plan, saying that the proposed system was neither “necessary nor desirable.” This conclusion was received with dismay by educators, civic groups and the media.

The advantages of Overlook’s summit was not to be lost to broadcasting, however. In the late 1950s, a plan to create a Community Antenna Television (CATV) site emerged. Cable television had its start with such systems, where signals received by a master antenna were fed into individual homes via cables. In communities that experienced poor reception, this obviated the need for residents to install costly antennas themselves. In the late 1950s and early 1960s, Kingston Cablevision, seeking to improve service to customers in the region, started building a television antenna on Overlook, near the old hotel (which in 1963 was reduced by a fire to the empty concrete shell that currently greets hikers).

In 1982, the state (which had acquired ownership of the mountain top) entered into a lease with WTZA Associates, allowing the company to install television transmission equipment and build an antenna on Overlook. Three years later, a 5-million- watt transmitter and antennae were constructed, and started broadcasting as the first commercial TV station in the Kingston area. It was anticipated that the signal from WTZA-TV, Channel 62, would reach from Westchester County to the Berkshires, and this writer recalls watching the station while living in southern Saratoga County (though bad weather sometimes made for sub par reception).

In 1989, the Friends of Woodstock brought a suit against the local planning board, challenging the legality of the 300-foot tower. The court determined that the tower was legal, because the television broadcaster qualified as a public utility. The transmitting facility was taken over by Regional News Network (WRNN), which no longer uses it for its own purposes, but other communication equipment is mounted on the WTZA tower, which continues to have its detractors.