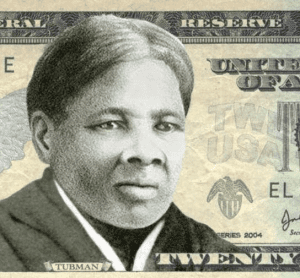 In April, Treasury Secretary Jack Lew announced that Harriet Tubman will be featured on the front of new $20 bills. Tubman is the first woman to appear on modern U.S. currency. She displaces former president Andrew Jackson, whose image will move to the back of the bill.

Lew’s decision came after a year’s discussion, including soliciting public input, on images for redesigned currency.

Tubman (ca. 1822 -1913) was an escaped Maryland slave who conducted others to freedom via the Underground Railroad before the Civil War. Tubman was audacious, often traveling with her escaping slaves at night, using the North Star for guidance, usually taking them to freedom in Pennsylvania or New York and often to Canada, then a British colony where slavery was prohibited. Southern slaveholders offered an award for her arrest, and she carried a pistol for protection. During the war, she served as a nurse, scout and guide for the Union Army and led a raid on a Confederate site that liberated a number of slaves. After the war, she became an advocate for woman suffrage. Harriet Tubman was a remarkable woman.

Lew’s announcement suggested that Tubman was “not just a historical figure, but a role model for leadership and participation in our democracy.” He also announced changes to other bills would feature other women and civil rights leaders.

Tubman is an inspired choice. New Yorkers can be particularly proud — she lived much of her life in Auburn, NY, and helped lead the liberation of fugitive Charles Nalle in Troy in 1860.

But her route to the front of the $20 bill has been a long and circuitous one.

Coming to grips with Tubman as a historical figure has been a challenge for historians.

Harriet Tubman never had the opportunity to learn to read or write. She left no letters or other primary sources. Much of her rescue work was necessarily carried out secretly. But she was proud of her accomplishments, realized they could be an inspiration to others, and wanted to share with others an account of what she had done. Furthermore, after the Civil War, Tubman needed money, in part to support her elderly parents. In 1869, she agreed to publication of a biography. She selected as author Sarah Hopkins Bradford, introduced by friends in Auburn, NY where she was living at the time. who had written mostly children’s books and sentimental novels. Bradford contacted several of Tubman’s associates to provide testimonials and reminiscences of her activities. She carried out extensive interviews with Tubman herself.

The book was rushed. Bradford wrote in haste to make a deadline of sailing for a European vacation in September. She hoped “the bare, unadorned facts are enough to stir the hearts of the friends of humanity, the friends of liberty, the lovers of their country” to purchase the book. The book was only 132 pages long, fewer than half narrative, the rest the testimonials she had collected, newspaper articles, and other items. Bradford emphasized the horrors of slavery, dramatized some events that Tubman descried, misinterpreted others, and omitted still other things. The result was a highly uneven work, Scenes in the Life of Harriet Tubman. Bradford’s Harriet Tubman: The Moses of Her People, published in 1886, was mostly a reprint of Scenes in the Life, but it softened the harsh realities of slavery and presented a milder, less militant view of Tubman.

Earl Conrad, an author on history, biography, and race relations, finished a biography in 1939, based on Bradford’s work, archival sources he was able to uncover, and recollections of people who knew Tubman in her later years. But major publishers turned it down, alleging she was not important enough for them to publish the book. A solid but modest piece of work, it was finally published in 1942 as Harriet Tubman: Negro Soldier and Abolitionist by Associated Publishers, a company established in 1920 to disseminate scholarly work about black history.

That was the last major biography for more than 6 decades, until 2004, when three scholarly and well-researched works, Kate Clifford Larson’s Bound for the Promised Land: Harriet Tubman–Portrait of an American Hero, Catherine Clinton’s Harriet Tubman: The Road to Freedom, and Jean H. Humez’s Harriet Tubman: The Life and the Life Stories were published.

But the historic Tubman still seemed elusive. Drew Gilpin Faust, then a professor at Harvard and now president of that university, reviewing these three books on Tubman in the New York Times in 2004, remarked that even the new biographies “leave us still searching for Harriet Tubman, still unsure how this particular slave woman was able to transcend the constraints her era and her society place upon her.”

Searching for the historically authentic Harriet Tubman is a continual quest of historians.

Milton Sernett’s 2007 book “Harriet Tubman: Myth, Memory and History” traced popular images, impressions and biographies of Tubman. He concludes that her life and actions have been interpreted and narrated in particular ways over time by different people searching for a “usable past,” including black activists, women’s rights champions, and social reformers. Sernett and others demonstrate how hard it has been to nail down objective facts about Tubman. For instance, one of the quotations attributed to her is “I have freed a thousand slaves,” but some descriptions of her life claim it was thousands, others say hundreds, and still others place it at about 70. Some historians describe her as a crusader against slavery; to others, she is a modest and determined woman concerned mainly with liberating individual slaves and conducting them to freedom. Sernett writes about “the interplay of history and memory.”

Her biographer Catherine Clinton, who campaigned to have Tubman on the $20, commented in an April 25, 2016 post on the History News Network Blog that by 2004, the scholarly community seemed to comprehend this complex woman. “But by the time Harriet Tubman: The Road to Freedom appeared in 2004, scholars seemed ready to include Tubman within the framework of African American freedom struggles, to place her alongside feminist icons within women’s history. As I suggest in my biography, she had an adaptive historical persona: the Black Panthers celebrated her as a gun-toting comrade in arms, while contemporary survivors of domestic violence invoked her while establishing clandestine safe houses to protect women and children escaping abuse. Finally, the academy seemed ready to embrace her as a long, lost hero who had been there all along.”

An enduring but imprecise popular image.

If academic historians and biographers were challenged to develop Tubman’s biography, her heroic story, particularly her courage in liberating slaves, though sometimes told in sweeping and general terms, continued to engage popular interest.

She was buried in Auburn after she died in 1913. Booker T. Washington, a prominent black educator and author, dedicating a plaque at her grave the next year, hailed her heroism and self-responsibility, progress, and racial harmony. “From this humble… black woman, we can all, black and white, glean a lesson which will strengthen us, broaden us, and make us of more service to our community, to our race, and to our nation.” Dozens of schools were named after her. Monuments were erected. Her story appeared in children’s books and school social studies courses. In 1944, the National Council of Negro Women petitioned the U.S. Maritime Commission to name a Liberty ship in her honor and sponsored a War Bond drive in her name. The SS Harriet Tubman was launched on June 3. The Postal Service issued a stamp in her honor in 1978. The Harriet Tubman Home for the Aged in Auburn, New York, was designated a National Historical Landmark in 1974 and her residence received the same designation in the 1990’s.

Tubman conducted many escaped slaves to Canada and lived there for a short time, and the Canadian government has designated a church associated with her liberation work as a national historic site. In 2005, it designated Tubman herself as a Person of National Historic Significance, a designation for people deemed to be of particular importance in the history of the country.

The Canadians bestowed official recognition on Tubman in 2005 but in her own country, getting official recognition took longer. Beginning in 2008, Tubman advocates and federal representatives campaigned for the creation of two national historical parks, one on Maryland’s eastern shore to include her place of birth and Underground Railroad sites she established or used in aiding escaping slaves, and the other in Auburn, NY where she spent much of her life.

The bill to establish the parks was first introduced in July 2008 by New York Representative Michael Arcuri, who represented the Auburn, N.Y, area where Tubman lived much of her life, New York’s U. S. Senators Charles Schumer and Hillary Clinton, and Maryland’s Senators Ben Cardin and Barbara Mikulski. It was reintroduced in 2009 by Schumer and Kirsten Gillibrand, who by they had been appointed to the seat previously held by Clinton, and in several subsequent years by Maryland and New York legislators. Maryland and New York advocates worked together. But the bill died in committee that year and in 2010

In 2011, Auburn advocates rallied for the bill in “Harriet on the Hill” day. Mikulski noted that Tubman was “tireless in her commitment to fight for those who could nor fight themselves.” Cardin recalled her as “a true American heroine and patriot, for whom liberty and freedom were not just ideas, but represented a real struggle for human rights. She lived those principles and shared that freedom with hundreds of others. These two parks will make it possible for Marylanders, New Yorkers and all Americans to visit and trace her life’s work and remember her tremendous contribution to our nation’s history.” Republican budget concerns sidetracked the bill; Senator Tom Coburn of Oklahoma argued that the existing parks were not well managed and the budget would not support new ones. The bill failed that year and in 2012.

Support increased. By 2013, every member of the New York congressional delegation had signed on as co-sponsors of the bill. But it still stalled in Congress.

In 2013, the State of Maryland, on its own, established the Harriet Tubman Underground Railroad State Park and Visitor Center in Cambridge, MD, near where Tubman carried out much of her work.

In March of that year, President Obama, weary of Congress stalling on the Tubman parks bill, by executive order designated the Harriet Tubman Underground Railroad National Monument. A National Monument is similar to a National Park, but it can be established by presidential order, under the Antiquities Act of 1906 that allows presidents to set aside important natural, cultural and historical sites for permanent protection. Since then it has been used a number of times by presidents when Congress balked at creating national parks.

Justifying his action, and indirectly chiding Congress for its lack of action on designating a park, Obama added “Although Harriet Tubman is known widely, no Federal commemorative site has heretofore been established in her honor, despite the magnitude of her contributions and her national and international stature.”

According to the NPS, “the monument’s boundary encompasses a mosaic of federal and state lands in Dorchester County, Maryland. It includes large sections of land that are significant to Tubman’s early years and evoke her life while enslaved and as a conductor on the Underground Railroad.”

In 2014, resilient Tubman advocates tried a new strategy. They attached a rider to the National Defense Authorization Act that called for the establishment of the Tubman national parks in Maryland and New York. Opponents could not sidetrack it this time without derailing the defense appropriation bill. It was part of the act, and President Obama signed it on December 14.

In Maryland, the park will encompass the area of the National Monument but the legislation permits later acquisitions. In Auburn, the 26-acre park will include Tubman’s former residence, the Home for the Aged that she established, and the nearby Thompson Memorial A.M.E. Zion Church, where she was active as a leader and supporter.

Implementation plans are still under way.