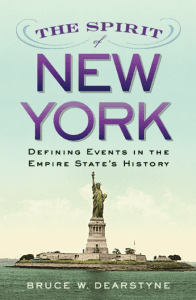 In his new book, Bruce W. Dearstyne presents New York State history by exploring sixteen dramatic events. From the launch of the state government in April 1777 to the tragedy of September 11, 2001, these events altered the course of state and US history.

The book includes daring acts of courage and against-the-odds stories of struggle and triumph. Dearstyne puts the fascinating people who made history at the center of the story, including John Jay, the lead writer of the first state constitution; Elizabeth Cady Stanton, the irrepressible crusader for women’s rights; Glenn Curtiss, New York’s aviation pioneer; and Robert Moses, controversial president of the 1964 New York World’s Fair. The momentous events illustrate the “spirit” of New York—the elusive traits that make New York State unique and a leader among the fifty states—and the complexity of its history.