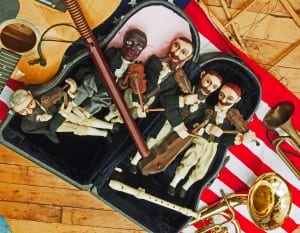 LaMama Theatre on East Fourth Street is where puppets, monsters and actors cavort, presenting classic and cutting-edge performance, whooping and hollering in many languages to stage just about any variety of theater from around the globe.

In March, in the space named after the founder, Ellen Stewart, the Czechoslovak-American Marionette Theatre partnered with Dvorak American Heritage Association to present “The New World Symphony: Dvorak in America,” by Vit Horejs. A jazz trio led by James Brandon Lewis on sax threaded musical commentary on the live and puppet action, adding a contemporary flavor to tales of Dvorak’s musical journeys through American sounds. 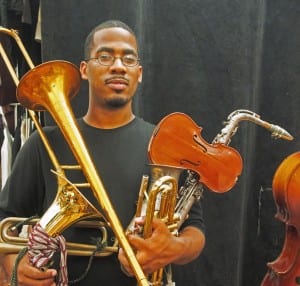 The philanthropist Jeannette Thurber (Deborah Beshaw-Farrell) had wooed Dvorak to come to New York and found an American Conservatory to promote American music in the 1890s. The Czech composer, already immersed in the repertoire of folk music sources in his home country, responded enthusiastically. Hearing what African American were playing and singing, he declared “the future of American music will be based upon the music of the Negro.” He furthered the career of singer Harry Burleigh (the teacher of Paul Robeson) and the violinist Will Marion Cook, as well as insisting that black musicians be allowed equal access to the new conservatory. Harlem Lafayette plays Burleigh with a frisky demeanor and resonant tenor, moving fluently between exposition and song. 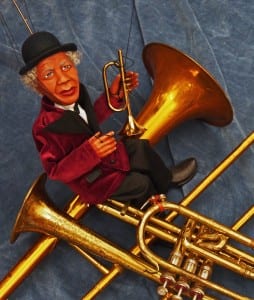 The director Vit Horejs keeps the stage busy, with humans and puppets in constant conversation. In addition to loose-jointed marionettes frolicing on their strings, inaminate objects such as amputated  violin bodies are turned into puppets too.

One impressive puppetry moment features a whole row of attached puppets doing a kind of rhythmic stomp with their collective wooden feet. In addition to a bevy of marionettists, the characters themselves sometimes take-over the control bars of the puppets. The vision of the old man Dvorak dangling the marionettes suggests the long fraught commander role of the composer/conductor bending the orchestra to his will. In the 18th century composers such as Gluck and Haydn wrote marionette operas, which delighted Mozart and his sister as a child. Thus, the pairing of the composer and puppet carries on a long tradition in stage and musical culture. Modern puppets continue their popularity, appearing, for example, in many shows at the huge annual Edinburgh Fringe Festival, where they perform everything from x-rated content to political soaps. 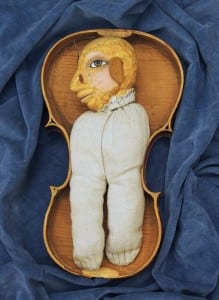 The music producer and critic Joe Horowitz has long been intrigued by how audiences respond to the sources of Dvorak’s New World Symphony. The famous work by one of America’s most interesting immigrant composers incorporates allusions to Indian moccasin bells, Longfellow’s Hiawatha poem, “Negro Melodies” and folk hymns of the prairie. These sources were explored in an innovative series of NEH “Music Unwound” programs that have traveled the US, most recently to Sioux Falls, South Dakota and the nearby town of Sissetoon, near the Dakota Native American lands. The South Dakota Orchestra of Sioux Falls played the New World Symphony on a program featuring Native American drummers — one of the sounds that inspired Dvorak on his visit to Spillville, Iowa in 1893.

Horowitz comments on the music presented there. “In Sisseton, “Dvorak and America” was doubly resonant. Dvorak’s sadness of the prairie, enshrined in the Largo of his great American symphony, instantly evoked the wide horizons directly at hand. The symphony’s many allusions to Longfellow’s The Song of Hiawatha,highlighted by visual renderings including the Dance of Pau-Puk Keewis with its moccasin bells (Dvorak’s triangle), served to introduce an Indian reservation to the long-ago Indianists movement of which Dvorak was part.”

In Spillville, Dvorak heard sounds from Native America that made their way into his music. Underpinning his championing of African-American music as an authentic New World creation, this active search for something that could be termed uniquely American was a quest to expand the composers’ repertoire with different kinds of sounds and rhythms. Often music appears to stand outside of time, performed over and over from scores, as though it were a pristine, eternal product, rather than a moment of sound in a time/space framed by the combination of how the music sounds and how the historical ear hears it. Horowitz’s musical journeys to the sources of social and cultural history contextualize music as something that sounds different to different people in different eras.