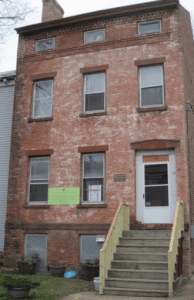 So what happened? Where are these reports? What action has been taken by the Freedom Trail Commission?

The regulation establishing the Commission is still on the books:

Just as the New York State Education Department was supposed to provide support for the Amistad Commission, the State Parks department was tasked with supporting the Freedom Trail Commission.  There was to be a master plan that included “sponsoring commemorations, linkages, seminars and public forum[s].” There were to be annual reports for five years beginning in 1999.

Clearly nothing happened after the establishment of the Commission. A FOIL request in 2016 to the State Education Department was forwarded to the History Office of the New York State Museum and produced the following response:

That report was initiated in 1997. I have a copy, as I attended a meeting when it was later released. It was submitted to the Freedom Trail Commission, it’s not one of the annual reports required by the regulation.

It appears that the Freedom Trail Commission, like the Amistad Commision, and much like the Heritage Areas Program, and the Path through History Program, were all press release programs, devoid of real substance.

Following receipt of the answer to my Freedom of Information Law request, I wanted to check on the progress of the Freedom Trail Commission and its work.  Since State Parks (a.k.a. OPRHP) was the designated to support the effort, I started with the State Parks website.

When you click on the Albany marker on the Google Map provided by State Parks, a blank box appears. There was no information at all about any Underground Railroad site in Albany. (There is no marker at all for Troy, the location of several sites related to the Underground Railroad; ditto for Schenectady.)

In 2013, a new Underground Railroad Map was developed, as reported in The New York History Blog:

The New York Underground Railroad sites have now become part of a larger effort led by the National Park Service. In that New York History Blog report, Ruth Pierpont, Deputy Commissioner for Historic Preservation at OPRHP was quoted in a statement issued to the press: “We are happy to partner with the Erie Canalway Heritage Corridor and I Love New York in making this user-friendly map available to promote an understanding of this important, and still under-recognized, aspect of the history of our state.”

This map is available on an app and on the web at www.jimapco.com/eriecanalway/ugrr.

So now there are two New York State maps of underground railroad sites, one on Google, found at the State Parks website, and one on the website of a private map company accessed through the National Park Service Erie Canal Heritage Corridor – if it occurs to someone to look through an Erie Canal website to find the the statewide Underground Railroad map.

On the “improved” Erie Canal – Underground Railroad map, the Stephen and Harriet Myers Residence in Albany is included.  The link takes you to an unrelated page titled “Body and Home Improvement” which asks why you should hire a water damage restoration company, the advantages of metal roofing, and provides healthy meal prep options.

Keeping links up-to-date is a challenge, especially if no one is responsible for doing it.

I decided to click the map marker for the First Congregational Church of Poughkeepsie, where I know the Mid-Hudson Anti-Slavery Project meets. The website link there took me to “Oops! That page can’t be found.”

There is more that could be written about the New York State Freedom Trail and its defunct commission, lack of staff, poorly executed and out of date websites, and the lack of support for conferences, public forums, and teacher programs, but the point should be clear – unfunded, dysfunctional, silo organized history projects are standard operating procedure in New York State.

Photo of The Stephen and Harriet Myers Residence courtesy of Lakestolocks.