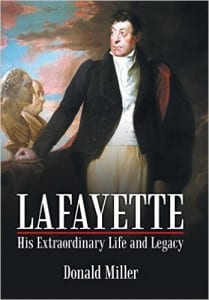 He used civil disobedience before Mahatma Gandhi and Martin Luther King, Jr. made it a thing. Gilbert du Motier, Marquis de Lafayette, French aristocrat and military officer, fought for the United States in the American Revolutionary War and influenced America’s founding fathers on issues like slavery and capital punishment.

Veteran journalist and self-proclaimed Lafayette historian Donald Miller’s seventh book, Lafayette: His Extraordinary Life and Legacy (iUniverse, 2015) looks in depth at one of the most influential men in French and American history.

In France, Lafayette was regarded as the ‘hero of two worlds’ and lent his fame to help convince royal ministers to send French troops and money to defeat the British in America.

An advocate for all religions, races and walks of life, Lafayette played a major part in restoring legal rights for Protestants and Jews in France who had been outlawed by Louis XIV. He also owned a farm in French Guiana where black laborers could go to earn their freedom.

Lafayette: His Extraordinary Life and Legacy also covers his impressive military career and his strong relationship with American leaders, even naming his son after George Washington. His adoptive father, Commander George Washington, made him the leader of the Continental troops in Virginia where he and his men trapped British General Cornwallis at Yorktown, Virginia, leading to his defeat. Lafayette is best known for his military action in the American Revolution, this book covers more about his life.