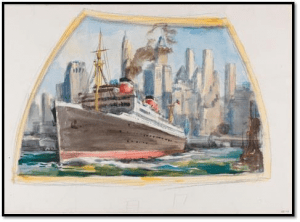 The Museum of the City of New York will present “From Ship to Shore: Reginald Marsh & The U.S. Custom House Murals,” a glimpse at rarely seen works from the celebrated American painter known for bringing city scenes to life from the beaches of Coney Island to the burlesque stage, and the United States Custom House.

The installation, which features works from the Museum’s collection that have not been viewed in over 20 years, includes a photo of the Custom House created by architect Cass Gilbert, a planning sketch by Marsh, and eight watercolor and graphite paintings. The exhibit runs through Monday, May 30, 2016.

In 1937, Reginald Marsh was selected for a commissioned series of murals for the rotunda of the United States Custom House as part of President Franklin D. Roosevelt’s Treasury Relief Art Program, which was dedicated to the embellishing of public buildings. This exhibit offers a look at the beauty of New York Harbor and serves as a window into a time of New York City’s history fueled by public grandeur and beautification projects, and when art was used to economically and aesthetically lift the country out of the Great Depression.

At the time of the commission, Marsh had established himself as a leading American painter who was known for his depictions of Depression-era New York City, especially of jobless men and women on the Bowery and amusements ranging from vaudeville and burlesque houses to the beaches and attractions of Coney Island.

Founded in 1923 as a private, nonprofit corporation, the Museum of the City of New York holds exhibitions, school and public programs, publications, and collections. Visit their website to learn more.