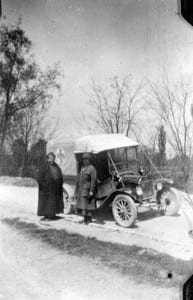 They drove ambulances, bandaged the wounded, fed the hungry, ran hospitals and orphanages and raised money. The men and women who volunteered in Europe during the early years of the Great War – when the United States maintained neutrality – forged a template for modern humanitarian efforts.

Their work helped to pioneer ways to negotiate aid around the interests of warring countries, and created the infrastructure for food relief and other efforts. These activities are featured in The Volunteers: Americans Join World War I, 1914-1919, a new teacher’s curriculum launched in conjunction with an exhibition at the National World War I Museum in Kansas City, opening in April.

The website features rare photographs from the collections of AFS, once known as the American Field Service, a group of volunteer ambulance drivers formed in 1914. Taken from their archive on 23rd Street in New York City, these images reveal the role that eager, engaged young men shouldered, as the US was still debating its participation in the war. Imagery of volunteer pilots posted next to their flimsy planes reminds us of the terrible casualty rate of flyers.

You will see old Fords modified to become ambulances, drivers wrestling stretchers over muddy terrain into the converted flatbeds, and scenes of mangled bodies at the American Hospital in Neuilly. Other archives reveal the prominent role of women, from battalions of nurses, to Salvation Army gals, to American Library Association book lenders, to private groups like the French Fund for the Wounded. There were even women ambulance drivers, seen in onesies with their wrenches in hand — always needed to fix frequent break-downs.

Ann Morgan’s War, an online exhibition from the Morgan Library shows these women at work with the Committee for Devastated France. They had to speak French, pay their own expenses, and buy their no-nonsense uniforms for $45 at B. Altman’s department store.

Edith Wharton who was living in Paris when the war broke out tirelessly organized relief efforts, raising money, writing articles and even founding workshops for women thrown out of work or widowed. She edited a collection of writings and art called The Book of the Homeless in 1916 which featured pieces by Jean Cocteau, Henry James, George Santayana, Theodore Roosevelt, a score by Igor Stravinsky, and a beautiful drawing by Pierre-Auguste Renoir of his wounded son Jean (later filmmaker, “Grand Illusion”). Like Wharton, Emily Price Post was concerned about the fate of France and neutral Belgium which was occupied by the Germans. Post (later author of etiquette books) had fund-raising bazaars in New York to gather food and clothing for children, beleaguered or orphaned by the enormous conflict. In The Volunteers curriculum, you can find out about the Lost Generation writers and artists who gave their time, work and efforts to help victims of the Great War. Primary Source, a teacher’s social studies learning group in Boston, created the materials, led by Susan Zeiger who herself has written an excellent book, In Uncle Sam’s Service: Women Workers with the American Expeditionary Force. 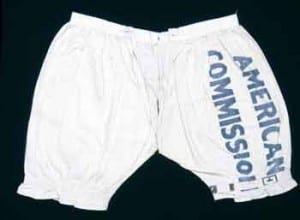 Flanders House in New York launched the educational website for The Volunteers at an event on Mar. 2, where AFS Head Archivist Nicole Milano welcomed the audience. Flanders House has been hosting many events related to the Great War Centennial, since their territory was the scene of such fierce fighting for much of the war. Like many Belgians, they are very aware of the crucial role played by Herbert Hoover, who organized a ground-breaking relief effort, The Commission for Relief in Belgium. The CRB shipped huge quantities of wheat to Belgium, and the grateful citizens often remade the empty flour sacks into embroidered thank you messages or even clothes.

One of the speakers was Dr. Sophie de Schaepdrijver who gave a brilliant talk, “Extending the Circle of Empathy.” She underlined how in an age of accelerating knowledge of the human body, the phenomenon of mass slaughter, mangling and poisoning held a particular resonance, as people saw the horrifying imagery from the trenches. Her lecture suggested that the level of scientific knowledge about the body was not matched by a morality that would prevent such huge loss of life.

Photos: Above, Gertrude Stein & Alice B. Toklas as volunteer drivers, with their Ford “Auntie” (courtesy of Beinecke Library, Yale Univ.);  middle, Triangle Film Corporation poster (courtesy of the Archives of the American Field Service and AFS Intercultural Programs); and below, Bloomers made from empty wheat sacks from American Commission for Relief of Belgium (courtesy of Hoover Institution).