She and her husband, James Robert McKee, and their two children Benjamin Harrison McKee and Mary Lodge McKee had been living at the White House during her father’s term. The presidential grandchildren – especially Benjamin, who got labeled as “Baby McKee” – were media sensations. (Though it was often stated that he had been born in the White House, both he and his sister were actually born in Indiana.) 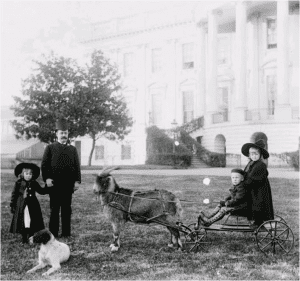 The antics of the children at the White House and elsewhere were widely reported in the press. When the young boy was taken to have a look at Barnum’s circus in 1890, it made the papers. He was, in those days, the “most famous baby in the world.” A rather exciting incident occurred when “Baby McKee,” riding in a cart drawn by a pet goat, was carried off the White House grounds, and along Pennsylvania Avenue before being chased down by the chief executive himself. Poems about him were printed in the humor magazines, Puck and the Harvard Lampoon. It was even suggested that Baby McKee’s image should be featured in the logo for the Daughters of the American Revolution, an organization in which his grandmother was very active.

When young Ben was taken on a vacation to Cape May, New Jersey in 1889, a reporter noted that “During his absence, Washington will be involved in a ‘gob of gloom,’ and the newspaper correspondents will have comparatively nothing to do.” President Harrison jokingly told reporters that they should stop giving so much attention to his grandson, lest people think the boy’s influence was greater than his own. A member of the Senate complained of the pointless coverage the papers gave the lad, and offered to give a new hat to any reporter who could say he had never written such a piece. No hats were awarded.

After leaving office, Harrison went to live in Indianapolis, and his daughter and grandchildren went along to help him get settled in. Harrison’s son-in-law (Baby McKee’s father), James Robert McKee, began an important association with the General Electric Company in 1893, so that he needed to be in New York State much of the time. Though the parents of young Ben were in Manhattan a lot, Ben and his sister mostly lived in Saratoga Springs, a place familiar to their mother as a result of connections with the Walworth family.

The Saratogian recalled in 1921 that “Mrs. McKee is known to many Saratogians and especially to the summer colony,” and observed that her son was also well-known in town. Local friends of the McKees included George Foster Peabody, and the families of James Lee Scott and Senator Edgar T. Brackett. The McKees, while in Saratoga, usually stayed at a cottage owned by Patrick McDonald, located on Union Avenue, very near the racetrack. Other times, they inhabited a cottage on Circular Street, and the United States Hotel was another of their favorite haunts. The McKees, though probably mainly summer visitors, were listed as residents of Saratoga in the 1900 Census.

The former president made trips away from Indiana, and often one or both of his grandchildren went along. Though Harrison tried to stay out of the limelight, that often was not possible. While he was shopping with his daughter and grandson in New York City, the party were spotted when an onlooker shouted “Hey there! There goes Harrison!” and a crowd instantly formed. Harrison was also spotted in 1894 when he took Ben to see his first play in New York. Harrison passed the summer of 1894 at Old Forge, spending a lot of time with his grandchildren. The following summer he bought property on the Fulton Chain of Lakes, and had the rustic Berkeley Lodge built, where he could entertain the grand-kids.

While living in Saratoga, the children’s lives still made it into the pages of the newspapers, though the arrival on the national scene of “Baby Ruth,” a daughter of President Grover Cleveland, took a lot of the spotlight away from the McKee kids. In July 1895, it was reported that “Baby McKee and his sister, who are at the United States Hotel, may be seen pedaling [bicycles] up the avenues every day.” 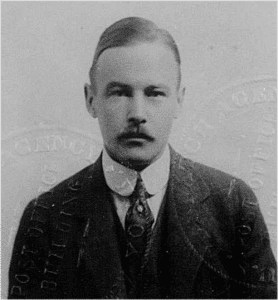 That summer, it made the news when Ben contracted scarlet fever in Saratoga. The entire family, including the visiting ex-president, were quarantined for a while. Granddad visited again in November, after the boy’s sickness had passed. In May 1896, the Troy Daily Times told how Baby McKee had become ill in Saratoga after he “caught cold on the lawn after a heavy storm.” His parents, who had gone to New York, rushed back to the racing city when they learned that the illness was diagnosed as bronchial pneumonia.

In 1896, Mrs. McKee had a falling out with her father after he married the much younger Mary Dimmick, who was her mother’s niece. The Troy Daily Times ran an item on April 1st saying that once Mrs. McKee had finished packing up her belongings in Indianapolis, her family would be moving into the McDonald cottage in Saratoga. Though the paper said it was expected that Harrison and his soon-to-be bride would spend part of the summer at Saratoga, “and will probably be guests of the McKee family,” the father and daughter remained estranged. Presumably he had little, if any, contact with his grandchildren from then on.

In 1901, when the former president was struck by a sudden illness at his home in Indianapolis, Mrs. McKee did not proceed there right away. Both of her children were sick with measles in Saratoga, and she and her husband stayed there to watch over them. They did not make it to Indianapolis before Harrison had expired.

In 1904, Mrs. McKee spoke to a reporter in Indianapolis, explaining that her son “is not Baby McKee any longer.” He was now a “husky young man of 17” who was preparing to begin college. “In recent years,” said the article, “Benjamin Harrison McKee has not had a picture taken, and at his request his mother will not tell reporters anything about him.” According to his mom: “He thinks he got enough notoriety when a baby to last him for some time.”

Among the few media reports about the grown-up “Baby” were one from 1907, while he was a student at Yale, when he made a brief comment about an uncle who’d suffered a nervous breakdown, and some stories about a confrontation he’d had with a Chicago taxi driver in 1914. Several visits he made to Saratoga, to visit old friends, were noted.

Only brief announcements let the public know what he was up to. He worked for some overseas banks, but more importantly, volunteered as an ambulance driver in France, beginning in 1916, prior to America’s involvement in the world war. (There is also evidence that he became a member of the French Army for a time.) He married an English woman, Constance Magnett in 1917, and seems to have spent much of his time overseas until the 1940s. Perhaps in Europe he could escape the moniker given to him as an infant. His mother passed away in 1930, and news reports said her son was residing in Paris at that time.

In 1932, an item in the Boston Herald noted McKee’s service in the ambulance corps in France during the war, but observed that he was no longer in the media’s eye. As a baby, it said: “There were songs about him. Colors were named for him. Multitudes were interested in everything the papers printed about the boy, and they printed plenty.”

The 1940 Census shows McKee as a resident of Manhattan. In 1942, according to his draft registration card, his address was Berkeley Lodge, Greenwich, Connecticut. He probably was staying with his father, who, upset about his declining health, took his own life in October that year.

McKee made the news one last time, in 1958, when his death in Nice, France was reported. Papers gave his residence as Field Point Park, near Greenwich, Connecticut.