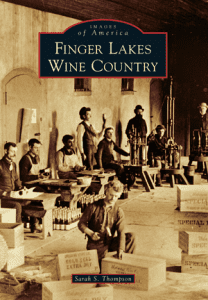 The book is a regional history of the wine industry, told through more than 200 vintage images from collections of area wineries, museums, historical societies, archives and passionate residents.

For more than 150 years, the Finger Lakes wine industry has played a role in the American wine industry history. At its heart are the four deepest Finger Lakes, part of a group of 11 long, narrow lakes in central New York. There, nestled among Canandaigua, Keuka, Seneca, and Cayuga Lakes, farmers began planting vineyards in the 1830s.

In the 1950s and 1960s, innovators like Charles Fournier, Dr. Konstantin Frank, and Walter S. Taylor experimented with hybrid and European vinifera grape varieties. But by the 1970s, local grape growers faced extinction; it would take a grassroots movement and landmark legislation in 1976 to bring about a Finger Lakes wine renaissance.

A native Virginian, author Sarah Thompson is a freelance writer and copywriter covering agriculture, science, food and wine, and business management. Her articles have appeared in several Cornell University publications.

Note: Books noticed on The New York History Blog have been provided by their publishers. Purchases made through this Amazon link