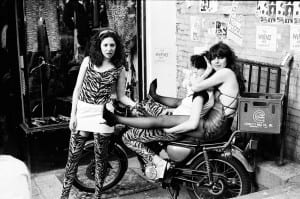 “The street has provided generation after generation with a mystical flash of belonging… experiences of mortal peril, dissipation and adventure…” writes Ada Calhoun in her new book St. Marks’s Is Dead. Her wry and witty journey through history notes that each generation plunged in the excitement and grunge of the Lower East Side street proclaims its own moment “the golden age,” while bemoaning subsequent events as the death of the place’s “true essence.” That heart might be an immigrant’s dream, revolution, creativity, dissent, fashion experiment or altered consciousness.

Her bedlam of voices making these claims is entertaining and illuminating, the voluble chatter of participants, residents, business folks and dissidents who gave the street its gritty allure. Calhoun conducted over 200 interviews to assemble this history, and they range from obscure rantings of yesteryear to tales of the poor and famous. You will hear from Leon Trotsky, W.H. Auden, Debbie Harry, Klaus Nomi, street people, skate-boarders, drag queens and theater operators. Emma Goldman, famed anarchist, ran the Modern School for a while, where ardent revolutionaries could learn from the works of Mikhail Bakunin and Karl Marx. Pamela Moore, a pulp novelist of the 1960s described the creative invasion of the 1950s as “their own brand-new Beatnikville where the artists had moved in on the Slavic factory hands and all lived together in glorious, outrageous, dedicated poverty!”

St. Mark’s Place a short stretch of East 8th street in New York’s East Village runs from Third Ave. to Avenue A at Tompkins Square Park. For the Lenape, the major uptown footpath converged at Kintecoying The Crossroads of Three Nations, which is now Astor Place. Bordered by a salt marsh, in Dutch Times, Peter Stuyvesant built homes, a windmill and a skating pond, along with his orchards and fields. In its early days, elegant brownstones complimented the wealthy node centered on Astor Place, its Opera House and library. But waves of immigration in the 19th century filled the area with Germans, and later Ukrainians, Poles and Puerto Ricans before the beatniks and punks found the crumbling tenement rents irresistible. At 12 St. Marks Place you can still see the building owned by the German Shooting Society, now a Japanese eatery. Across the street was the famous club, the Electric Circus where Andy Warhol presented his Plastic Exploding Inevitable spectacle and Jimi Hendrix played. The cover of Calhoun’s book is a street view redone for the famous “Physical Graffiti album art (based on 96-98 St. Marks Place) by Led Zeppelin. 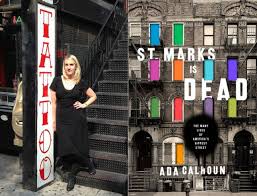 This neighborhood was home to many of the ethnic gangs that constituted the neighborhood roots of organized crime. At 80 St. Marks Place a Bavarian bootlegger served City Councilmen drinks and entertainment during Prohibition. The thirsty ones had to enter through a butcher shop on First Avenue. Later the place was sold to Howard Otway, an actor and theatre buff, and the place run by Otway’s son Lorcan, is still a theater and a little tavern that serves absinthe. Upstairs is the Museum of the American Gangster (full disclosure, I work there as a curator). There you can peruse the the history of organized crime, tales of Lucky Luciano, Meyer Lansky and Bugsy Seigel among others, a period Tommy gun, a still and song sheets to croon the “Alcoholic Blues.” Lucky Luciano’s office was around the corner on First Avenue and nearby mob Boss Joe “Dodge the Bullet” Masseria was shot, but not killed in front of 82 Second Ave in 1922.

Abby and Anita Hoffman launched the Yippies out of a St. Marks Basement apartment in the late 1960s, and poets and revolutionaries could buy (or shoplift) the essential underground literature at St. Marks bookstore. A decade later punk clubs and watering hole began to pop up. Ann Magnuson hosted one of the best at Club 57, rented from the Polish National Church. Her themed nights included a Putt-Putt Reggae, and Model World of Airplane Glue (sniffing encouraged), and attracted artists such as Keith Haring and Kenny Scharf. Fashion conscious youth in the punk era shopped at Manic Panic run by the sisters Tish and Snooky, or at Trash and Vaudeville, still open and run by Jimmy Web a vision of blonde spiked hair, tatoos and camo. Tats and piercing continue to be easy to get there. These days you can still see lamp posts crusted with mosaics by street artist Jim Power, but the escalation of rents and building of luxury condos has seasoned the grunge with more upscale pedestrians toting briefcases. Calhoun’s history offers great flavors from the past, and she has dug up obscure and fascinating details about local characters who deserve a spot in the pantheon of St. Marks Place.