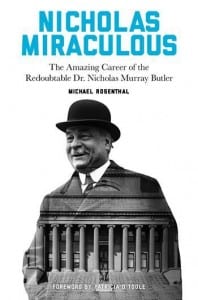 To some, like Teddy Roosevelt, he was “Nicholas Miraculous,” the fabled educator who had a hand in everything; to others, like Upton Sinclair, he was “the intellectual leader of the American plutocracy,” a champion of “false and cruel ideals.” Ezra Pound branded him “one of the more loathsome figures” of the age. Whether celebrated or despised, Nicholas Murray Butler was undeniably an irresistible force who helped shape American history.

Rosenthal traces Butler’s rise to prominence as president of Columbia University, which he presided over for 44 years and developed into one of the world’s most distinguished institutions of research and teaching. Butler also won the Nobel Peace Prize and headed both the Carnegie Endowment and the American Academy of Arts and Letters, among innumerable other organizations. In 1920, Butler sought the Republican nomination for president, managing to garner more votes on the first ballot than the eventual winner, Warren G. Harding. Rosenthal’s narrative explores what propelled Butler to these achievements and more.

Author Michael Rosenthal was associate dean of Columbia College for 17 years, later becoming, as a member of the English Department, the first holder of the Roberta and William Campbell Professorship of the Humanities at Columbia University. His books include Virginia Woolf and The Character Factory: Baden-Powell’s Boy Scouts and the Imperatives of Empire.