In the early nineteenth century, it was difficult to be an American sculptor. There were no professional art schools, no specialized carvers, few quality materials, and only a few practicing sculptors in America. The pilgrimage to Rome was a necessity for those who aspired to be sculptors. If a woman wished to pursue sculpting, she confronted additional obstacles.

A woman who adopted almost any ambition beyond homemaking was considered abnormal. The working of clay and marble was considered undignified, and required physical effort, a labor far too arduous for a proper lady. Also, a sculptress might have to wear trousers, and, even if the figures in her statues were draped, she must have some knowledge of the anatomy under the drapery. To learn about muscles and bones, she may have to dissect corpses and study nude models.

Despite scorn and ridicule, a group of women took up residence in Rome, Italy, in the mid-1800s and created sculptures from the fine white marble quarried nearby. Henry James irreverently described these women as “that strange sisterhood of American ‘lady sculptors’ who at one time settled upon the seven hills in a white, marmorean flock.” While it may simply have been a playful moniker for this group who chose to sculpt using white marble, White Marmorean Flock came to be viewed by some modern-day scholars as sexist and demeaning. Regardless of his intent, James decreed the women a flock-a homogenous group-despite their considerable differences in age, social position, sexual preference, and race.

Edmonia Lewis, often described as the first black sculptress, was the daughter of a Chippewa mother and a black father. Born around 1843 near the city of Albany, Lewis became orphaned at a young age and lived for a few years as “Wild Fire” with the Chippewa near Niagara Falls. While there, she enjoyed making baskets and moccasins and selling them to tourists. “I liked it a great deal better than I do your civilized life,” Lewis told Lydia Maria Child. “There is nothing so beautiful as the free forest. To catch a fish when you are hungry, cut the boughs of a tree, make a fire to roast it, and eat it, in the open air, is the greatest of all luxuries. I would not stay a week pent up in cities, if it were not for my passion for Art.”

As a teenager, Lewis attended an abolitionist school in McGrawville, before heading to Oberlin College to pursue studies in art. After a mob attacked her and white housemates accused her of theft, Frederick Douglass advised Lewis to “seek the East and by study, prepare herself for work and further study abroad.”

The Revolution told the story of Lewis arriving in Boston and seeing a statue of Benjamin Franklin. “I, too, can make a stone man,” she said to herself. After meeting sculptor Edward A. Brackett, he gave her a lump of clay and a mold of a human foot. “Go home and make that,” he said, “if there is anything in you, it will come out.” 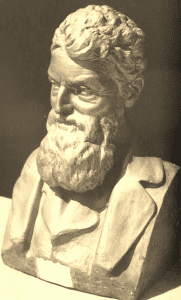 After doing her best, she gave the model to Brackett, who broke it up and said, “Try again.”

Edmonia Lewis kept working clay models under the tutelage of Brackett, whom she admired, in part, because of his bust of John Brown. Brackett had visited Brown in prison and taken head measurements before Brown’s hanging in 1859. As soon as Lewis mastered clay modelling, she used Brackett’s bust of Brown as a model for a medallion of the head of John Brown.

The medallion was pronounced excellent and sold quickly. Next, she made a bust of Colonel Robert Gould Shaw, the first man to take command of a black regiment. After observing Lewis work on the bust of Colonel Shaw, Anna Quincy Waterston wrote a poem titled “Edmonia Lewis.”

‘Tis fitting that a daughter of the race
Whose chains are breaking should receive a gift
So rare as genius. Neither power nor place,
Fashion or wealth, pride, custom, caste, nor hue
can arrogantly claim what God doth lift
Above these chances, and bestows on few.

Poet Anna Quincy Waterston has her own connection to the Adirondacks. Her name is carved into a monument at the John Brown Farm near Lake Placid. Anna Waterston and journalist Kate Field were the only women, and the only Bostonians, of the twenty contributors to the purchase of the farm in 1869. The owners donated the farm to New York State in 1896 and erected a monument with the donors’ names.

As Waterston indicated in her poem, Edmonia Lewis possessed a rare gift. Having demonstrated “the highest order of genius” in her clay and plaster models in Boston, according to The Christian Recorder in 1866, Lewis traveled to Rome to study “among the greatest masters of the art” and transfer her work into marble. 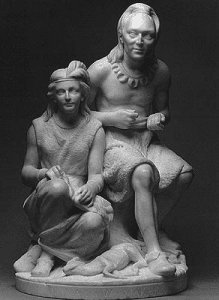 Edmonia Lewis recalled her exodus in blunter terms. “I was practically driven to Rome,” she said, “in order to obtain the opportunities for art-culture, and to find a social atmosphere where I was not constantly reminded of my color. The land of liberty had no room for a colored
sculptor.”

She said she was treated kindly in America, but she adopted Rome as her home. “I like to see the opera, and I don’t like to be pointed out as a negress.”

But Lewis did not want her work to be praised because she was “a colored girl.” She said: “I don’t want that kind of praise. I had rather you would point out my defects, for that will teach me something.”

While some praised her because she was black, others attacked her work, calling it a hoax. To prove that a black woman could be a sculptor, Edmonia Lewis carved her marbles without the help of assistants. Most sculptors hired professional carvers to do the initial rough work; some even let their carvers complete the entire piece. Lewis showed her strength and talent, wielding chisel and mallet, as tourists swarmed to her studio to watch her shave and shape the marble. 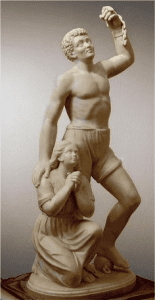 Adelaide Johnson joined Edmonia Lewis and the lady sculptors in Rome in 1884. At the Columbian Exposition in Chicago in 1893, it would be Adelaide Johnson winning recognition for her busts of Anthony, Stanton, and Mott. Years later, she merged the busts with a pedestal creating the Portrait Monument, which was placed in the U.S. Capitol.

However, the demand for neoclassical works had declined in the 1880s. Auguste Rodin and romanticism became popular, bronze favored over marble, and Paris overtook Rome as the center of the art world. Yet Adelaide Johnson and Edmonia Lewis persisted in the neoclassical style, staying part of the sisterhood in Rome. While Johnson continued to travel to Italy into the 1920s, Lewis left Rome in the 1890s and disappeared. Only recently was it determined that she died in London in 1907.

The extraordinary life of Edmonia Lewis is being rediscovered and her sculptures are being celebrated again. One hundred and fifty years after her move to Rome, she most likely remains the only woman sculptor of Chippewa and African-American heritage who adopted the neoclassical style and executed her works in white marble.