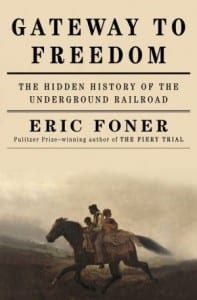 Dr. Louise Mirrer, President and CEO of the New-York Historical Society, has announced that historian Eric Foner will be awarded with New-York Historical’s annual American History Book Prize for Gateway to Freedom: The Hidden History of the Underground Railroad (New York: W. W. Norton & Company, 2015). The award recognizes the best book of the year in the field of American history or biography.

Professor Foner will receive a $50,000 cash award, an engraved medal, and the title of American Historian Laureate, which will be presented on April 8, 2016. The ceremony is part of New-York Historical’s Chairman’s Council Weekend with History, a two-day event featuring an array of speakers discussing important historical events that have impacted New York City and the nation.

“Eric Foner’s riveting, inspiring story of fugitive slaves and the individuals who helped them to reach freedom contributes to our understanding of the history of American slavery,” said Dr. Louise Mirrer, President and CEO of the New-York Historical Society. “The book presents new evidence about previously unknown protagonists in the networks of resistance known as the Underground Railroad. Its focus on New York and the North as centers of pro-slavery and abolitionist movements echoes our institution’s rich Museum and Library collections as well as its programming. Serendipitously, Gateway to Freedom has been named winner of New-York Historical’s 2016 American History Book Prize.

Gateway to Freedom was selected by a prize committee comprised of historians and New-York Historical leadership from a field of 131 submissions. The book tells the story of the Underground Railroad in New York City and along the East Coast. It chronicles the efforts of an intrepid band of black and white abolitionists to assist fugitive slaves who passed through New York City, in the face of the city’s close connections with the slave South through the cotton trade and burgeoning textile industry. Working outward from a unique document ― the “Record of Fugitives” compiled by abolitionist editor Sydney Howard Gay in 1855 and 1856 ― Gateway to Freedom investigates how and why slaves escaped from bondage, who helped them, and their final destinations. It also examines the broader impact of the fugitive slave issue on national politics, American law, and the sectional conflict. It elucidates the actions of fugitives and their allies who played a major role in the coming of the Civil War and the end of slavery.

Eric Foner currently serves as the DeWitt Clinton Professor of History at Columbia University. He received his doctoral degree at Columbia under the supervision of Richard Hofstadter. He is one of only two persons to serve as president of the three major professional organizations: the Organization of American Historians, American Historical Association, and Society of American Historians; and one of a handful to have won the Bancroft and Pulitzer Prizes in the same year. Among his publications is The Fiery Trial: Abraham Lincoln and American Slavery, published in 2010 and the recipient of the Bancroft Prize, Pulitzer Prize for History, and The Lincoln Prize.

The American History Book Prize was previously awarded to Jill Lepore for The Secret History of Wonder Woman; Doris Kearns Goodwin for Team of Rivals: The Political Genius of Abraham Lincoln; David Nasaw for Andrew Carnegie; Daniel Walker Howe for What Hath God Wrought: The Transformation of America, 1815–1848; Drew Gilpin Faust for This Republic of Suffering: Death and the American Civil War; Gordon S. Wood for Empire of Liberty: A History of the Early Republic, 1789– 1815; Ron Chernow for George Washington: A Life; John Lewis Gaddis for George F. Kennan: An American Life; Robert Caro for Lyndon Johnson: The Passage of Power; and Andrew Jackson O’Shaughnessy for The Men Who Lost America: British Leadership, the American Revolution, and the Fate of the Empire.